The Kentucky Natural Lands Trust has remote trail cameras along wildlife corridors near Blanton Forest on Pine Mountain – and one of those cameras captured video of a mama black bear and three frolicking cubs. 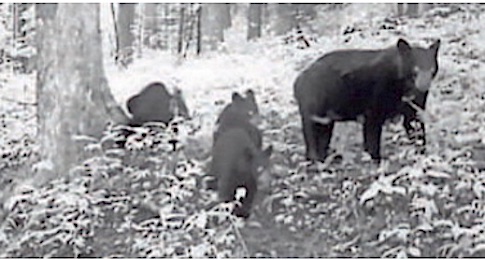 One of the cubs sizes up a tree, before moving on to follow its mother.

Black bears are believed to have traveled through the forests of Pine Mountain on their return to Kentucky in recent years, after being gone from the state for much of the past century.

The land trust announced recently it had acquired three tracts of forestland totaling 651 acres along Pine Mountain in Bell County.

The tracts contain a diversity of unique habitats and add to the critically important conservation lands that are already a part of the Pine Mountain Wildlands Corridor, trust officials said. Over the last year, nearly 4,000 acres of forests in Bell and Harlan counties have been added to the wildlands corridor through the work of KNLT and the support of many donors and partners.

“Thousands of acres have come together from Pineville to Harlan,” said Greg Abernathy, assistant director of the land trust.

That’s an important ecological buffer to the 3,500-acre Blanton Forest, and the work also ties into Kentucky’s connection to a planned Great Eastern Trail, America’s newest long-distance trail for hikers from Alabama to New York, he said.

These bears were in Harlan County. Abernathy said it has several trail cams on property it manages. They’ve captured images of coyotes, deer, bobcats, wild turkeys, elk and other critters.

By James Bruggers
The Courier-Journal