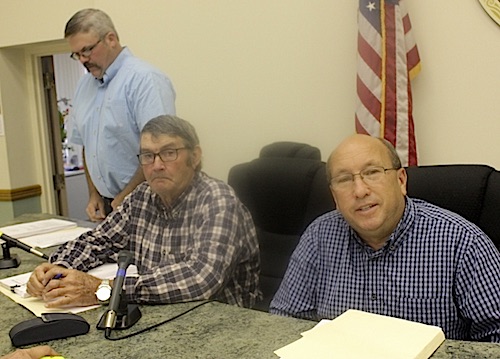 *  Motion by John Lemaster, second by Rick Blackburn to approve the minutes from the August 15th and the August 18th Special Meeting.

*  Motion by Rick Blackburn, second by Earl Boggs to approve the 2nd reading of Budget Amendment #1

*  Motion by Rick Blackburn, second by John Lemaster to approve the bills

*  Motion by Earl Boggs, second by Morris Howard to approve the Treasurers Request

*  Motion by Earl Boggs, second by John Lemaster to accept the Treasurer’s Report

*  Motion by John Lemaster, second by Earl Boggs to approve the MOA between Fiscal Court and the Blaine Fire Department

*  Motion by Earl Boggs, second by John Lemaster to approve the CDBG Procurement Code for Blaine Fire Department and a $450,000 grant to build a new fire station at Martha.

“This is a great opportunity for all the people of Blaine, Martha, and surrounding area for fire protection and also on their homeowners insurance. I’m very thankful for the Lord’s blessing and all the hard work of Butch Smith and the fire department board for seeing their needs and the public’s needs,”  Judge Executive John Osborne said.

District 3 magistrate Earl Boggs said he is happy with the new station.

“It’s going to be located at Martha instead of Blaine, so it should be called the Martha Fire Station,” Boggs laughed. “But any time we can get something like this for my district and the county with no cost to local taxpayers, it’s a good thing.”

*  Motion by Rick Blackburn, second by Earl Boggs to receive the Lawrence Co. Public Library Tax Rate of 14.7%. The board voted to accept a lower rate than the compensating rate this year by accepting the 2016 real property tax rate of 14.7 for both real and personal property for fiscal year 2017-18. This lowers both rates this year for the library.

The Court then had a discussion with the County Attorney, Clerk and Sheriff about the $36 million reduction of assessments in the County this year and how that would impact the budget which has already been approved for next fiscal year. “

“The problem is these oil and gas companies have drilled these multi-million dollar wells but the price of gas and oil is down right now and they are waiting for the prices to go back up before they export any of the gas,” Sheriff Garrett Roberts, who is responsible for collecting taxes in the county, said. Oil and gas reserves are not taxed until they get in the pipeline. 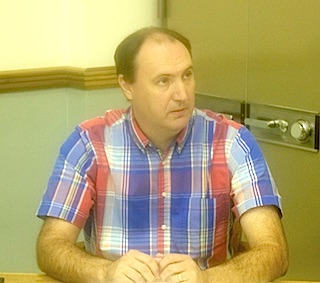 “In fact, said County Clerk Jobe, “our county assessments were up by $5 million this year but it wasn’t nearly enough to make up for the loss in mineral and gas taxes.”

The court set the County tax rate at 16.8% (compensating rate) which is slightly higher than last year’s (15.10) but not as high as 2014 (See charts below). Motion made by John J. Lemaster, second by Rick Blackburn. Vote was 3 to 1 with Morris Howard voting against the motion.

The compensating rate is the rate, when applied to the current year’s property assessment, excluding new property, produces an amount of revenue equal to that produced in the preceding year. In other words, the compensating rate should bring in approximately the same amount of money as last year. 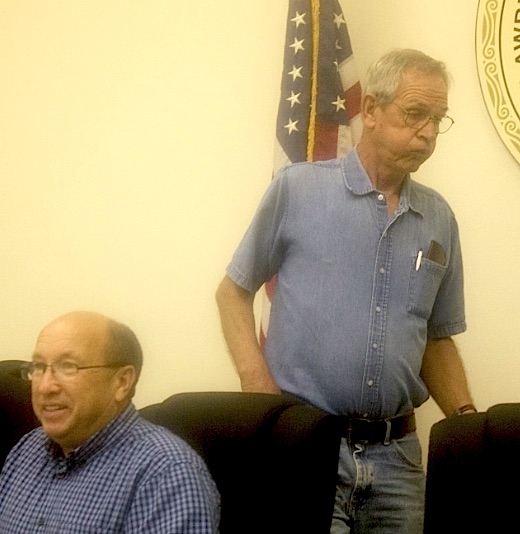 “I just can’t see raising taxes when we have not even looked at the county government and discussed ideas to reduce the things we spend money on,” Howard, who has voted ‘no’ on every tax increase brought before the court in his two terms as District 1 magistrate, said.

The Court then acknowledged receipt of all the Special Districts Tax Rates.

County Attorney Mike Hogan said the average taxpayer with a home valued at $100,000 will pay an additional $90.20 this year.

Howard again lamented the fact that the county’s seven taxing districts set their own rates and the fiscal court has no sayso over what they do. Chris Jobe then explained that the wording on the taxing districts report to the court will now read “received” instead of “accepted’ as it has been in the past because the fiscal court has no control over the decisions of the school board, the Library board, the health dept, the Extension service or the special fire district or any other of the taxing districts.

*  Motion by Earl Boggs, second by Rick Blackburn to authorize PVA not to print any tax bill less than $10.00

*  Motion by Rick Blackburn, second by Earl Boggs to authorize Clerk to Advertise for Surplus Property

*  Motion by Rick Blackburn, second by John Lemaster to approve the Agreement and Resolution for 80/20 Bridge Agreement between Law. Co. Fiscal Court and Rural Secondary program. Any amount over $97,044 will be the responsibility of the county.

*  Motion by John Lemaster, second by Rick Blackburn to approve payment in the amount of $1,500 to Sherry Burchett for Sheriff settlement

*  Motion by Earl Boggs, second by John Lemaster to approve MOA with EKCEP regarding the use of 2 rooms at the Community Center donated as in-kind contribution for Lawrence Co. Teleworks Hub for 1 year. The company will have two rotating employees at the Community Center that will attempt to hire 20 or more people for companies in the program, Economic Development Coordinator Catrina Vargo said. 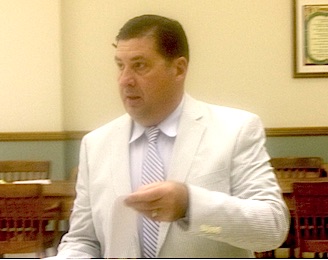 At the request of the magistrates and the judge/exec. here is the recent history of property tax rates in Lawrence County. It does not include the assessments for each year, however. 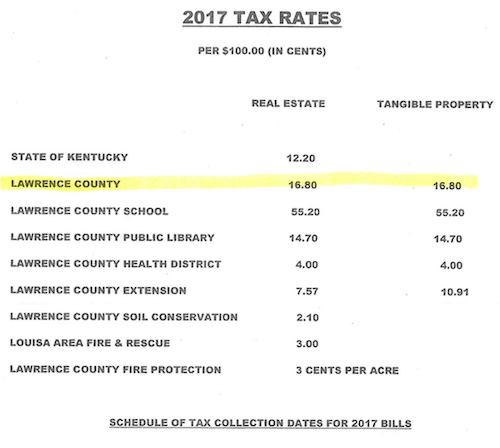 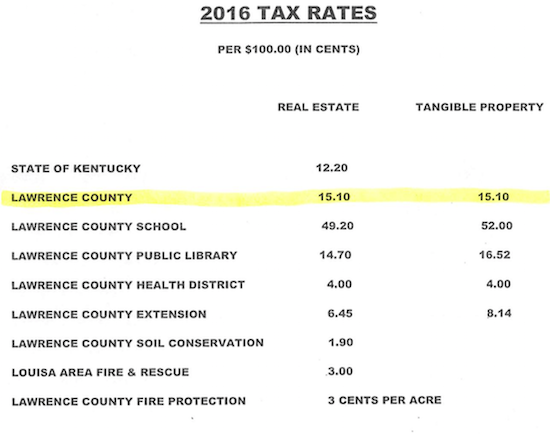 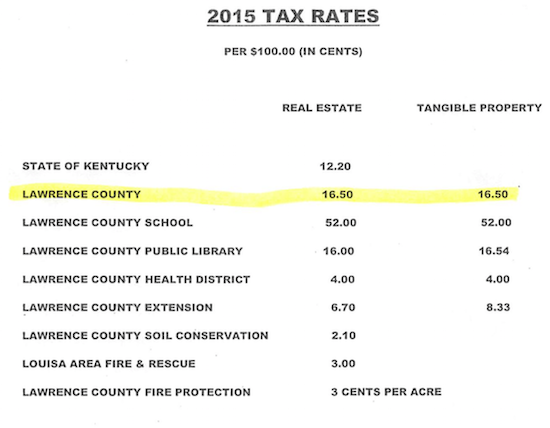 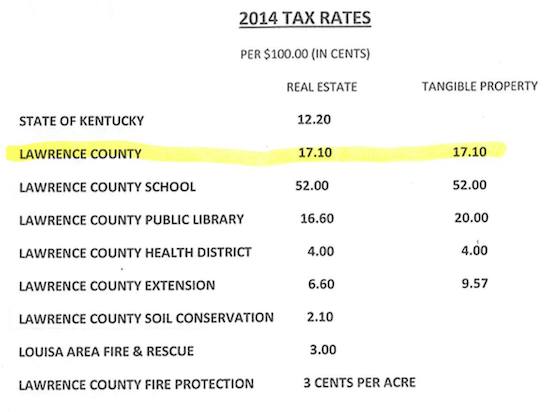 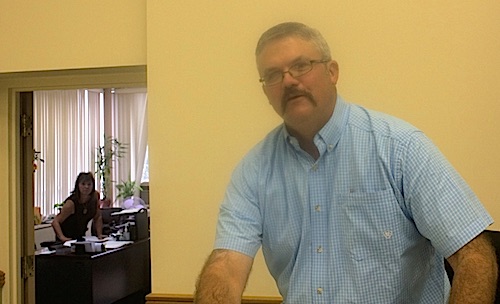