Ray Jones says he has served in Frankfort long enough

An election finance filing made Friday could indicate a potential shakeup in the landscape of both state and local politics. 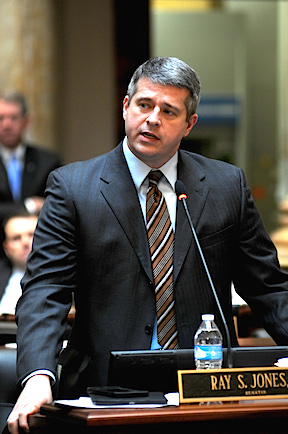 In a statement issued Friday evening, 31st Dist. state Sen. Ray S. Jones II, who represents Pike, Johnson and Martin counties, and who serves as the Democratic leader in the Senate, announced that he intends to file to run for the office of Pike County judge-executive in the 2018 primary election.

“For nearly 17 years, I have been privileged to to represent the people of Pike County as a state senator,” Jones said in a statement issued Friday. “I’m very proud of the improvements that we have seen in terms of transportation, infrastructure and education during my tenure in Frankfort, but for Pike County to reach its full potential, it is apparent that we need a new direction in our county and that is why I have filed a letter of intent with the Kentucky Registry of Election Finance that I will seek the office of Pike County judge-executive in 2018.

Jones has served in the Kentucky Senate since he was first elected in 2000. He was re-elected in 2016, defeating challenger Glenn Martin Hammond by taking 71 percent of the vote in the primary election in the three-county 31st Senate District. In Pike County alone, records show, Jones took nearly 69 percent of the vote.

Although he has served only in the Senate, Jones has remained involved in Pike County politics, often having been the target of the ire of Pike County’s magistrates, particularly over the issue of coal severance tax distribution.

As of presstime Friday, Jones was the only candidate who has filed any paperwork indicating they will run for the office.