‘HOW SWEET IT IS’ AT LOUISA ROTARY

Louisa Rotary held its weekly meeting Thursday, September 14th at the First Baptist Church. The meeting began as usual, with a prayer for our community, the Pledge of Allegiance and Four Way Test.

President Chris Jobe said after all of festivities and hard work, as usual the Bahama Mamas and Rotary Hash was amazing and raised a lot of money at Septemberfest that will go back to our community.

*   Sam Lyons, with the Louisa Food Pantry was present and explained that they are having some hardship with finances. The pantry feeds about 600 families a month and money previously donated has run out. Rotary has decided to speak about the issue in the next board meeting. 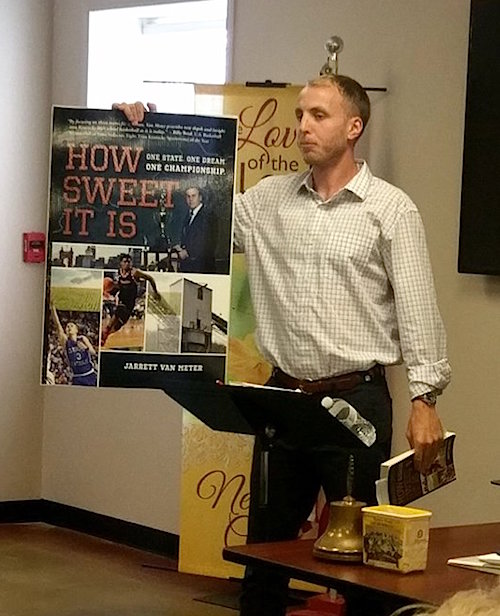 The speaker for the week was the author of “How Sweet It Is”, Jarrett Van Meter who said he has traveled the state of Kentucky chronicling three Kentucky basketball teams on their journey to the ‘Sweet 16’.

Van Meter told about his experience following the Clay County Tigers, the Covington Catholic Colonels and the Taylor County Cardinals. His book takes the reader into the locker rooms, best rides, practices, and games of each team.

After an interesting speech the meeting was adjourned for the week.