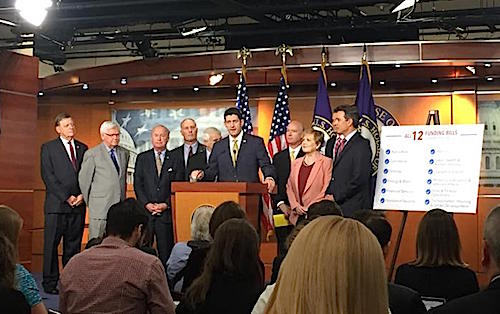 The legislation includes all 12 annual Appropriations bills, and totals $1.2 trillion, including $87 billion in funding for Global War on Terror (GWOT)/Overseas Contingency Operations (OCO). It funds critical programs like national defense and economic development, while also working to eliminate wasteful spending.

Rep. Rogers, Chairman Emeritus of the House Appropriations Committee, released the following statement about his support of the legislation:

“This bill beefs up our Armed Forces to ensure our brave men and women in uniform are well-equipped to beat back our enemies overseas and keep us safe here at home. It prioritizes our efforts to combat the drug abuse epidemic, providing robust funding for a comprehensive federal response that mirrors Operation UNITE’s successful three-pronged strategy in Kentucky.

“The bill also includes important resources to reinvigorate the economy in our rural coal communities – including strong funding for the Appalachian Regional Commission and another $30 million for the AML pilot program in Kentucky. I have secured two years of funding for this important effort to reclaim and repurpose abandoned mine land to create jobs and long-term opportunities.

“I’m optimistic this important legislation will be signed into law before the end of the year so we can continue to build on our progress in Southern and Eastern Kentucky.”

The legislation now heads to the U.S. Senate for consideration.

Prevention and Treatment: The bill provides $1.86 billion for the Substance Abuse Block Grant to help states plan, implement and evaluate prevention and treatment activities. In addition, this legislation fulfills the second installment of a two-year, $1 billion commitment combatting opioid addiction through the 21 st Century Cures Act and fully funds the Comprehensive Addiction and Recovery Act. It also allocates $112 million for CDC Prescription Drug Overdose Prevention and $91 million for Drug Free Communities program. Finally, the bill provides $10 million for a new project to train medical residents and fellows for mental health and addiction treatment in underserved areas that need it the most.

Enforcement: The bill supports the Drug Enforcement Agency’s efforts to prevent, detect, and investigate the diversion of controlled substances with $419.5 million, $30 million more than in FY17. It also provides an additional $21 million for the High Intensity Drug Trafficking Areas (HIDTA) program, which provides help to areas, like Appalachia, tackle high levels of drug trafficking and related violence. In addition, $500 million is provided for the Byrne JAG Program that is critical to law enforcement as they fight against drug use and violent gang activity in our communities.

Food and Drug Administration (FDA): The FDA receives a total of $5.2 billion, including revenue from user fees – $490 million above FY17. This funding will allow the FDA to fully implement new initiatives to encourage development of abuse-deterrent opioids and review new therapies for treating addiction.

This legislation prioritizes efforts to drive economic growth in rural America, including Southern and Eastern Kentucky.

$182 million for the Abandoned Mine Lands Pilot Program: These funds will enable six participating states to reclaim AML sites in conjunction with economic development projects. Under this funding level, Kentucky will receive an additional $30 million in 2018.

$176 million for the Economic Development Administration: Despite an attempt by the Administration to eliminate this program, this bill funds the EDA at $176M, and language in the bill explicitly provides that the EDA shall continue to provide $30 million to assist coal mining communities.

$1.7 billion for the Job Corps: This program is a great educational and vocational resource for young men and women. For over 50 years, Job Corps has successfully educated and trained millions of young adults for jobs in high demand industries and trades.

$1 billion for TRIO: The bill provides $1 billion for TRIO programs, $200 million more than what the President requested. These programs serve and assist low-income individuals, first-generation college students and individuals with disabilities as they progress from middle school to college.

$190 million for Community Development Financial Institutions (CDFI): Despite an attempt by the Administration to eliminate funding for this program, this bill provides $190 million for the CDFI program, which has helped small businesses get off the ground.

$31 million for SBA Microloans: This funding level is the same as FY 2017, and will help small businesses and certain non-profits start up and expand.

Rural Housing Loans and Rental Assistance: The bill provides a total of $24 billion in loan authority for the Single Family Housing guaranteed loan program, the same as FY17. In addition, the bill includes $900 million in direct loans that provide low-income rural families with home loan assistance. $1.345 billion is also provided for rental assistance for affordable rental housing for low-income families and the elderly in rural communities for renewal of all existing rental assistance contracts.

This legislation stems the tides of Obama’s war on coal, and invests in efforts to revitalize this critical industry.

$7.5 billion for the Environmental Protection Agency: This constitutes a reduction of $528 million below the FY 2017 enacted level.

The legislation supports the President’s proposal to reshape the agency’s workforce by providing resources requested to offer buyouts and voluntary separation agreements to employees.

This bill also reflects the Administration’s goal to rein in outdated, unnecessary and potentially harmful regulations at the EPA. For example, it includes language authorizing the Administrator of the Environmental Protection Agency and the Secretary of the Army to withdraw the Waters of the United States rule.

MSHA Reallocation of Resources in Response to Coal Mine Decline: The bill reduces funding for MSHA Coal Enforcement to reflect a reduction in the number of operational mines nationwide, and included the following language:

“The Committee notes significant worker dislocations and mine closures as a result of economic conditions throughout the mining industry, and in coal mining in particular. The Committee reiterates its support for the ongoing effort to bring MSHA enforcement into proportion by redistributing resources and activities to the areas where mine production is currently occurring.”
Builds on Progress in Border Security and Emergency Preparedness

The legislation seeks to ensure that our homeland is safe, our borders are secure, and we are prepared for man-made and natural disasters.

$13.8 billion for Customs and Border Protection (CBP) : The bill contains $13.8 billion in discretionary appropriations for CBP – an increase of $1.6 billion above the FY 2017 enacted level. These resources ensure our borders are protected by putting boots on the ground, improving infrastructure and technology, and helping to stem the flow of illegal goods both into and out of the country. Within this total, the legislation includes:

$1.6 billion for physical barrier construction along the Southern border – including bollards and levee improvements – meeting the full White House request;

$106 million for new aircraft and sensors; and

$7 billion for Immigration and Customs Enforcement (ICE): The bill provides $7 billion for ICE –$619.7 million above the FY 2017 enacted level. Within this total, the legislation includes:

$2 billion – an increase of $30 million above the requested level – for domestic and international investigations programs, including efforts to drug smuggling, combat human trafficking, child exploitation, cybercrime, and visa screening.

$8 million for the Federal Emergency Management’s Education, Training, and Exercises Continuing Training funding: $3 million of this funding is specifically designated for FEMA-certified rural and tribal training, which has benefitted the Rural Domestic Preparedness Consortium (RDPC) that operates out of the Center for Rural Development in Somerset, Ky.

This legislation includes several other of Fifth District priorities, including efforts to preserve the sanctity of life, sustain our amazing national parks, and ensure that every American has access to clean and safe drinking water.

$95 million for Bureau of Prisons construction : This is $45 million more than the enacted FY17 level, and will allow for continued progress related to the federal prison in Letcher County.

$275 million for the Land and Water Conservation Fund (LWCF) : The bill provides $275 million for LWCF programs – $211 million above the President’s request. State and local recreation and battlefield preservation programs are prioritized, while strategic investments in federal land acquisition are recommended.

Protects the Sanctity of Life : expands a policy prohibiting U.S. assistance to foreign nongovernmental organizations that promote or perform abortions, called “the Mexico City Policy,” to all global health programs.

THE BILL MUST STILL BE APPROVED BY THE U.S. SENATE