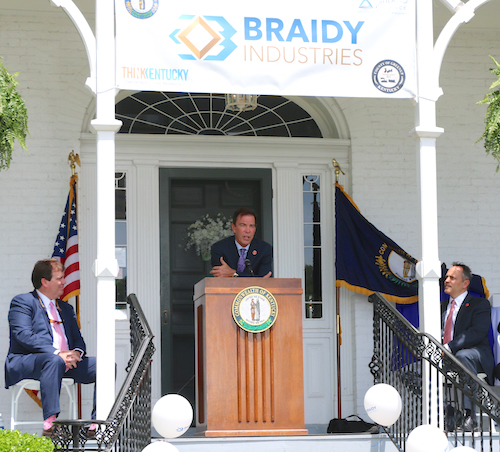 In its September issue, the magazine acknowledged Kentucky Power and AEP’s role in helping to bring Braidy Industries to eastern Kentucky. This year marked the sixth consecutive year AEP has been recognized by the magazine.

The magazine reported that “When Braidy Industries this spring announced a 550-job, $1.3 billion aluminum rolling mill (near) Ashland, Kentucky, Braidy Chairman and CEO Craig Bouchard pointed out a key factor: ‘We have negotiated an efficient package with Kentucky Power and AEP because they wanted us in eastern Kentucky. I believe we have the lowest energy cost of any rolling mill producing aluminum in the United States. The competitive advantage of that is spectacular.’”

In recent years, Kentucky Power has aggressively pursued economic development opportunities and invested millions of dollars in eastern Kentucky to revitalize the region and attract commercial and industrial customers like Braidy.

“Braidy Industries represents one of the many important partnerships Kentucky Power is forming to bring business and jobs to eastern Kentucky,” said Kentucky Power President Matt Satterwhite. “Economic development is at the center of our long-term strategy and this recognition reinforces that our pursuits are in the best interest of the communities we serve. When we attract large commercial and industrial customers like Braidy, our customers gain jobs, government gains taxpayers and we gain customers.”

Kentucky Power, with headquarters in Ashland, Ky., provides service to about 168,000 customers in 20 eastern Kentucky counties. Kentucky Power is an operating company in the AEP system, one of the largest electric utilities in the U.S., delivering electricity and custom energy solutions to nearly 5.4 million customers in 11 states.

SOCCERDAWGS TOUGH SCHEDULE WILL PAY OFF IN THE END