JACKSON COUNTY, Ky (WYMT) – Officials with Kentucky State Police say the searching for a young boy who went missing in Jackson County is now over. They said he was found dead about six tenths of a mile from where his mother was found beaten. 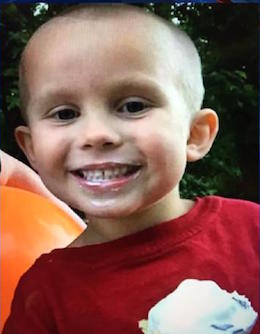 Family members told WYMT five-year-old James Spoonamore went missing and his mother was found beaten and unconscious. They said she was taken to UK Medical Center.

Police say Belt kidnapped the boy and his mom. He allegedly beat the mother and threw her from a cliff.

She last saw her son alive as she was forced off a cliff. The 5-year-old’s body was found Monday

The body of a kidnapped Jackson County 5-year-old was located Monday during the third attempt to find the child since his mother was discovered at the bottom of a cliff two days earlier, police said.

James Spoonamore was found six-tenths of a mile from where his mother, Jessica Durham, was rescued on Saturday near Sparks Ridge Road, state police Commissioner Rick Sanders said. Police did not say how James died or release many details about the search or the case.

Additional charges are expected to be filed against Lonnie Belt, 41, of McKee, police said. After Durham told police Belt was her assailant, Belt was located at 1:39 p.m. Saturday and charged Saturday night with kidnapping an adult and a child, assault and evidence tampering, police said.

James and Durham were kidnapped from their home while mother and son were getting ready to go to the doctor, said Durham’s sister, Mary Batson. Durham put her son in the child seat in the back seat of their vehicle, Batson said.

“She walked in there and when she walked in, the guy hit her in the back of the head and she fell to the ground,” said Batson, who spoke with Durham on Sunday. “He got mad because she didn’t get knocked out with the first hit so he hit her two or three more times. She would never knock out.”

Belt blindfolded Durham, tied her hands and put her in the car, with James in the back seat, Batson said. The suspect drove, and when he stopped, he took off Durham’s blindfold and untied her hands.

Durham tried to fight back, but Belt shoved her down an 80-foot cliff, Sanders said. Durham told police she last saw her son with Belt as she was forced over the cliff.

Jessica was found about 10:45 a.m. the next day, Saturday, by hikers and was taken to University of Kentucky Chandler Hospital. Batson said her sister has a broken ankle, a shattered pelvic bone, internal bleeding and head trauma. Durham is on oxygen but will live, Batson said.

“I just can’t understand why this would happen,” Batson said. “Jesse just stays to herself. She volunteers at the library and was looking for work. She is quiet and doesn’t put her business out there. Especially James. He just turned 5 last month and just started school. He’s a lovable kid all around. You can tell he’s momma’s boy.”

Belt was arrested at his McKee residence. He told police he got into an argument with Jessica Durham about money, hit her in the head, tied her up, took her to a cliff and beat her again, according to court records. Belt acknowledged the child was with his mother when he took Durham to the cliff. Belt did not initially tell police what happened to the boy or where the boy was, Batson said. He told police he painted over Durham’s blood in his house, which led to the evidence tampering charge. Police would not explain how the blood got there.

More than 200 people volunteered for the search of the boy, including K9 units and aircraft from the Kentucky National Guard. The search was concentrated in the area of Sparks Ridge and Turkey Foot roads. He was found about 9:30 a.m. Monday 180 feet off Sparks Ridge Road in the Daniel Boone National Forest. An autopsy was scheduled in Frankfort.

“It’s a tragic day for all of us,” Sanders said. “It’s horrible any time you have a death. But when you have the death of a young child, it hurts even more.”