SALYERSVILLE – Due to an unforeseen change at the state level, the Magoffin County School District is facing a possible lose-lose situation, though it’s working with a local legislator in hopes of finding a fix in Frankfort before the change affects taxpayers and jobs. 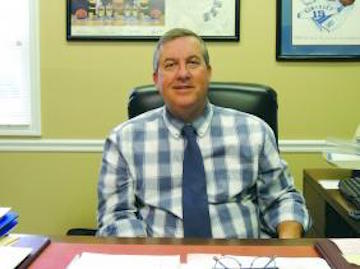 The changes, handed down from the Department of Revenue, started last year, and Magoffin County Schools Superintendent Scott Helton told the Independent that they were able to cover those losses through combining job duties and not filling positions when people quit or retire, but back-to-back cuts provide decreases in revenue that are hard to manage.

The cuts stem from the Department of Revenue’s decision to cut assessment values for unmined minerals off the county’s books.

Last year roughly $39 million in unmined coal values were taken off Magoffin’s assessment. That cut in taxable assets forced the school system to take the compensating rate in order to break even, though they still lost money.

Superintendent Helton said he was able to combat the changes in how the taxes were collected by cutting everywhere they could possibly trim the budget, while not affecting the students at the school level.

“Approximately 77 percent of the budget is salaries, and we don’t want to do anything that will hurt anything at the school level, so I made it up in district-level positions,” Helton said. “If someone retired and we could absorb those job duties, I chose not to fill the position. In total, I was able to cut four jobs, all at the central office and district level.”

On Aug. 10 the school system received the county assessment (which they use to formulate a working budget and set the tax rates) and found out another estimated $25 million had been cut. In total, the decision in Frankfort has taken an estimated $194,000 out of the school board’s budget between the last year and the current school year.

“If this had happened once and then not, again, for a few years, we could have dealt with it,” Helton said. “But back-to-back like this, and with no warning, we can’t make up that much money that quickly without cutting jobs or raising taxes, and we don’t want to put the burden on the taxpayers, either.”

Though this issue is felt locally, it’s affecting school systems region-wide, as unmined minerals are struck from the tax bases across the area, throwing all coal-producing counties into an economic tight spot.

State Rep. John Blanton (R-Salyersville) explained that the Department of Revenue reformulated their calculations for taxing unmined minerals in 2016, which is supposed to be reformulated every 10 years but hadn’t been since the 1990s.

“What’s occurring within county governments and school systems, the school system has no control over this,” Blanton said. “They’re losing roughly $148,000 this coming year and Scott has cut everything he possibly can cut to keep from going with the compensating rate, but they’re stuck with this and have to keep the system functioning, leaving them in a hard predicament.”

Blanton said, “We’re not saying the landowners should have to pay. We don’t believe unmined minerals should be taxed, but we’re just trying to find a way to resolve this without raising taxes so the school system will be able to operate.”

Helton agreed, stating doesn’t believe landowners should have ever had to pay taxes on unmined minerals, however, he said the school system needs some relief from the sudden change in how they receive their funding.

Blanton has coordinated a meeting, slated for Sept. 6, with eastern Kentucky superintendents, the state commissioner of education, the secretary of finance, the state budget director, and members of the governor’s staff, in order to find viable solutions for the immediate situation, as well as a long-term fix.

“We’re planning on addressing this in the next legislative session for a long-term fix, but we need to find an immediate solution now,” Blanton said.

Blanton explained that the recent cuts are the continuing impact of the sharp decline of the coal industry.

“We thought we had seen the worst of it with all the job layoffs, but it’s just now catching up with us and is no one’s fault,” Blanton said.

Helton said the loss of coal has already hit the school system hard, with declining enrollment. All in all, they receive $3,981 per child in SEEK funding and have lost 120 students in the past five years, meaning another $477,720 has been cut from their annual budget to date just from enrollment changes.

Cuts have come pretty steadily across the board, though Helton said their overhead costs continue to increase. From electricity, transportation and maintenance, the system only gets more expensive to run each year, making the current changes to unmined mineral taxes more difficult to plan around.

“That’s what makes it frustrating,” Helton said. “We’ve done our best to not have to take anything away at the school level and we’ll still have to find a way to cut around $148,000 some way.”

Right now, the school board has until late September to set the tax rates, which they can decide to leave the same (which would mean losing at least roughly $148,000 in revenue), take the compensating rate (which technically raises taxes to bring in roughly the same amount of revenue as the previous year), or take up to a 4 percent increase (which Magoffin County Schools have never done).

“Central, northern, and western Kentucky have much larger tax bases and revenue and they’re actually increasing enrollment numbers, but Magoffin has the highest unemployment rate in the state and our enrollment continues to decline,” Helton said. “Our taxpayers can’t be expected to make up the difference.”

Helton commended Blanton for working diligently with superintendents throughout eastern Kentucky to set up the meeting they all hope will help school systems find relief from the seemingly never-ending budget cuts.

He also reiterated that the budget issues have nothing to do with the current school board or administration.

“This is not about any money being mismanaged or spent,” Superintendent Helton said. “We came into this and can’t help what’s already here, and we’d be okay with it, but it’s just this additional loss – totally unexpected and out of the control of the local school board. We were already making cuts we found necessary to get the most out of the system, and all the cuts have helped, but this is a lot less.”

While both Blanton and Helton said they hope they will be able to find a solution for the immediate problem plaguing eastern Kentucky school systems in the upcoming September 6 meeting, Blanton said, from a legislative perspective, the unmined mineral tax needs to be eliminated and they need to set up a separate system for funding schools.

“We need to separate school systems from all that so funding is not dependent on something so fluid and unreliable,” Blanton said. “Funding needs to be stable – year in and year out – so this doesn’t happen, again.”