John Calipari tweeted that Sunday’s Team Up For Texas telethon on WKYT and other television stations around the state surpassed the $1 million mark. 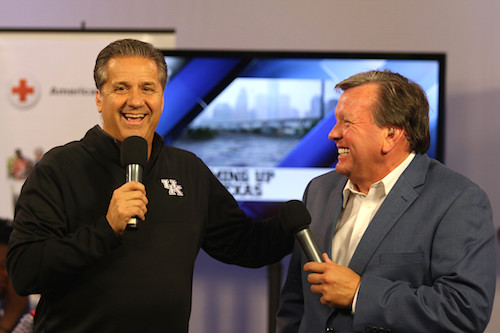 Prominent businessman and UK athletics booster Joe Craft and his wife Kelly were the co-chairs. Kelly is the U.S. ambassador to Canada but she was all about Texas – and Kentucky – on Sunday, saying, “You can’t sit and watch and know that you can participate and not do anything.”

Calipari, who spearheaded a $1 million fundraiser for Haiti in similar fashion in 2010, was doing his part of servant leadership when he put the telethon together earlier in the week. He said being the Kentucky coach was far more than X’s and O’x and watching film.

Current UK players and Red Cross workers manned the phones for the telethon.

The Caliparis, John and Ellen, and the families of UK coaches Mark Stoops and Matthew Mitchell donated $25,000 each for Hurricane Harvey relief early in the telethon that was broadcast across the state.

“I’m just so proud of the people of Kentucky,” Calipari said. “I grew up in Western Pennsylvania and Ellen grew up in Osceola, Missouri. These are people that we just feel so comfortable around, and I know there were $25 donations, there were $50, there were $100, and you know they really were like, ‘I don’t have this $25, but I’m going to do it.’ There were people that gave $10,000 to have dinner (with us). Great. They could afford it. But it was more about how many (donated).”

The goal was to cover expenses to feed and shelter 2,000 people for at least two weeks, Calipari said. He will be visiting the Houston area on Sept. 10 in what was originally going to be a recruiting visit.

“You cannot do numbers that really make a difference unless people help,” Calipari said. “Joe and Kelly Craft, they called right away, ‘Hey, how can we help?’ I said we’re going to need matching funds. How about Mark (Stoops) and Matthew Mitchell and their families giving $25,000 each? How about our golf coaches (Brian Craig and Golda Borst) throwing in money? It was everybody doing their part to make this happen.”

One of the biggest surprises of the day came from Jon Hook, the director of the ESPN 30 for 30 documentary about Calipari. Hook donated $100,000 to the cause.

Marcus Camby, who played for Calipari at Massachusetts and lives in Houston, also phoned in to the broadcast.

Houston basketball coach Kelvin Sampson also called and said he was going to petition the NCAA for a third preseason exhibition game between Houston and Kentucky to be played in October to raise more money for hurricane relief.

“The people of Kentucky are great neighbors,” Sampson said. “There is no doubt this is coming out through your telethon, Cal.”