Prestonsburg, Ky. — Lawrence Co. junior quarterback Noah West had a career night on the ground as the Bulldogs took care of Prestonsburg 37-32 in a shootout at Blackcat Stadium on Friday night. 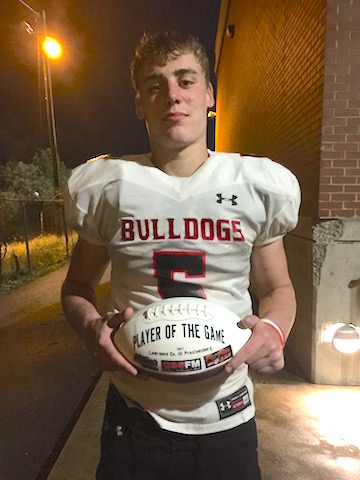 Ashton Blankenship had two touchdown runs of 6 and 8 yards to back up West.

Caleb Fletcher made 1 PAT on the night.

Lawrence Co. had 504 total yards, all on the ground.

“… It was a great win, Prestonsburg is a quality football team. Varney and Slone are very good players and Prestonsburg is a tough place to get a win. Just very happy for our guys. We will enjoy this one until Sunday and then we will start thinking about Powell County.”

“… We had good film study all week, Prestonsburg plays a lot of different fronts so we knew we had to prepare for a variety of situations. The biggest factor of the game has to be the line. Running with the momentum from last week, they stepped up and played a man’s game today giving us all the offense we needed.

“… We knew the weather would be rough, so we prepared all week. We played with wet balls in practice and really focused on ball security.”

“… I was really shocked when they told me the total. I had no idea it was anywhere close to a record.”

Growing up in Louisa – Field Trips