When someone is asked to imagine a person living in Appalachia, they’ll likely imagine a white person.

But the Appalachians have a significant African American population in certain places. The Washington Post’s Emma Ockerman writes a fascinating piece about what it means to be an African American living in Appalachia, feeling “like a racial minority within a cultural minority.” 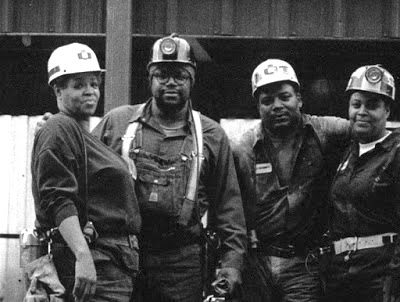 It’s part of a Post series called About US on issues of identity in the United States.

Ockerman takes us to the coal-mining town of Lynch in Harlan County, Kentucky, where 200 of the 700 residents are African American.

“If Lynch reflects the economic decline across the central Appalachian region, the outlook is worse for black Appalachians. There, black residents are twice as likely to lack a bachelor’s degree compared with their white peers. By a slimmer margin, they’re also more likely to experience poverty,” Ockerman writes.

But the black residents of Lynch say they love their hometown and want to be recognized and respected as both African Americans and Appalachians.

University of Kentucky professor and poet Frank X. Walker has a name for African Americans who live in coal country: “Affrilachian.” He founded the Affrilachian Poets, which gives African American writers a space to talk about their identities at the intersection of race and geography.

Affrilachian poet and West Virginia native Crystal Good told Ockerman that “It’s important now for the people of West Virginia to speak up and show the diversity of the region.”

DEPARTMENT OF ENERGY REPORT COULD PROVIDE A BOOST TO COAL, NUCLEAR INDUSTRIES