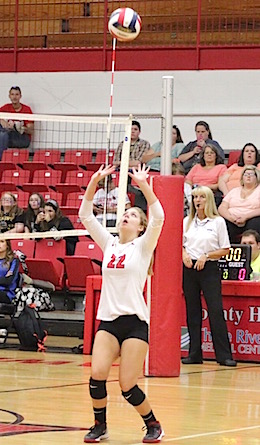 Junior Lexie Workman led the VolleyDawgs with 35 assists during the match and has over 100 so far this season. She also chipped in with 4 aces, 4 kills and 6 digs.

Aryana Chapman with the one of her 27 aces in the comeback win.

On Monday night the VolleyDawgs traveled to Betsy Layne to take on Floyd Central (gym not ready) and lost in straight sets to the pre season favorite in the 58th District and 15th Region Jaguars ( 25-12, 25-8, 25-13 )

The VolleyDawgs will travel to West Liberty to face Morgan Co. ( 3-7 ) on Thursday night and then travel to Sheldon Clark ( 5-3 ) on September 7th.

“… The team played with heart and accomplished a win!! Lexie Workman with 35 assists and Aryana Chapman with 27 kills. Great team work and a well earned outcome over Piarist.”
“… After we fell behind 2 sets I just told them to play fundamental solid volleyball and the rest would follow. They had to be the ones to do it.”

“… Absolutely something we can build on, they have the skill and they have shown tonight they have the heart. So now we need to put it all together!”