WERE SOME TURTLEMAN RESCUES FAKE NEWS?

Were rescues staged on Turtleman’s show? Producer is fined after investigation 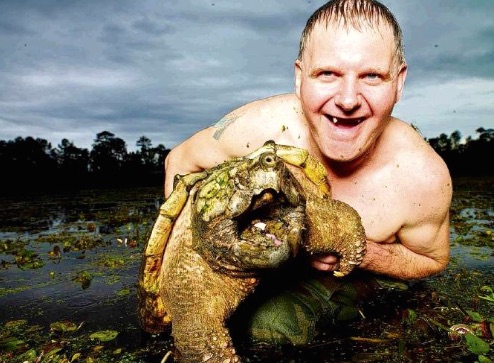 The information about the fines was released last week by PETA, which requested that USDA investigate the show after a report in Mother Jones magazine detailed how producers staged episodes that sometimes resulted in the harm or death of the animals.

Mathews said the investigations appear to confirm that the show was entirely staged.

“All signs point to that the only reality was staged scenes staged by catching terrified wild animals, put into dangerous situations and then recatching them,” she said. “This was cruel abuse of animals that caused them fright, fear and extreme distress.”

According to a report by the USDA, the show filmed animals, including a coyote, porcupines, raccoons, bats, armadillos and deer for exhibition purposes without a valid license. A producer, whose name has been redacted, was cited for the violations and was fined $1,400, according to the documents.

The show, which went off the air in 2014, was produced by Sharp Entertainment.

In one instance, for an episode titled “Deer Destruction,” the show “filmed a farm-raised white-tailed deer inside a shop, causing it unnecessary discomfort and stress.”

“The deer was chased and wrestled around,” Mathews said. An earlier citation by the USDA was for an episode that showed Brown wrestling a zebra to the ground at a roadside exhibit in Texas.

Mathews said that so far, there haven’t been any fines or citations against Brown, but more investigations might be active.

PETA, or People for the Ethical Treatment for Animals, said the producer faced as much as $100,000 in fines. PETA also said USDA’s action will do little to deter animal abuse.

In 2013, Kentucky Fish and Wildlife warned Brown, who was a licensed nuisance wildlife officer best known for removing large snapping turtles from farm ponds when he was discovered by reality show producers, that he wasn’t permitted to handle deer.

Kentucky Department of Fish and Wildlife spokesman Mark Marraccini said Brown’s last license expired in February 2014; Brown requested a license this year but was denied because he hadn’t fully documented his removals in 2013.

“Just to go fishing turtles out of ponds, I don’t think he needs a nuisance license. He can use a fishing or hunting license,” Marraccini said. “But if he’s trapping raccoons or coyotes for people …”

Brown was “discovered” by Fish and Wildlife’s “Kentucky Afield.”

According to the Mother Jones piece, the show staged cases, including the one involving a deer that was trapped in a consignment store, then filmed Brown and his cohort, Neal James, dealing with the situations. Mother Jones reported that in the process, a baby raccoon in Kentucky and bats in Texas died after being used on the show.

Karen Bailey, who founded the Kentucky Wildlife Center, which is now in Lexington, said in 2014 that producers contacted her days before filming the raccoon episode in 2012, in which a mother raccoon and her babies supposedly were found in a laundry room. In fact, the raccoons came from two other places, and the “mother” was a male, Bailey said.

The babies eventually reached Bailey in such dire shape that she wasn’t able to save one of them.

“I think the whole premise behind the show is wrong. These animals are being put in repeated, stressed environment,” Bailey said. “I have no beef against (Ernie Brown) personally. I think this is a bad TV show, a badly scripted reality show. Animal Planet should know better.”

The show also came under fire after an episode filmed in Danville made it appear that a water moccasin, a venomous non-native snake, had invaded a city park swimming pool. A Danville city investigation found that the incident was completely staged. At the time, an Animal Planet spokeswoman said it was common for the producers to bring in animals for story lines.

In an interview with the Herald-Leader in 2014, James denied that any animals were harmed in their presence or with their knowledge.

Of the Mother Jones article, James said at the time, “It’s all mistruth. It’s some kind of doctored-up story, and I don’t know why they are coming after us. … If I saw any of that kind of stuff going on, I would have stopped it. Rest assured, no animal was harmed.”

HOW TO HELP TEXAS WITH HURRICANE AFFECTS...ON THE LEGIT