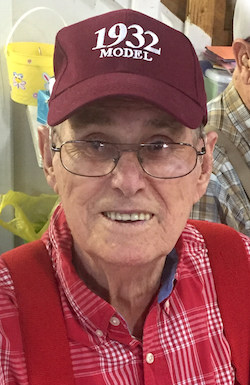 Thomas Jordan, 85, of Louisa, KY went home to be with the Lord on Thursday August 24, 2017 following a brief illness.

Tom was born June 23, 1932 at Louisa, the son of the late Robert and Mae Vaughan Jordan. In addition to his parents he is preceded in death by his wife Martha Runyon Jordan who died in April 2012 and two brothers Dan and Richard Jordan.

Tom loved his family; he loved the Lord serving him with singing and visiting the nursing home and with a jail ministry. Tom was a retired KY Division of Forestry Fire Warden, a member of the Cherryville Missionary Baptist Church, and served in the United States Army during the Korean War.

Funeral services will be held on Saturday August 26 at 1:00 pm at the Cherryville Missionary Baptist Church with Dr. Charles Price and Rev. Jonathan Hall officiating. Burial with military honors will follow in the Fairchild-Lemaster Cemetery Louisa, KY.

Friends may visit the family on Friday from 5:00 pm to 9:00 pm at the Wilson Funeral Home.