SHEPHERD COMES BACK TO HIS HOME STATE AND PITCHES WELL

Louisville, Ky. —  Louisa native and Pawtucket Red Sox reliever Chandler Shepherd recently visited Louisville to play a 4 game series with the Bats and I had a chance to catch up with the 24 year old for a few minutes in the bullpen before Wednesday’s game. 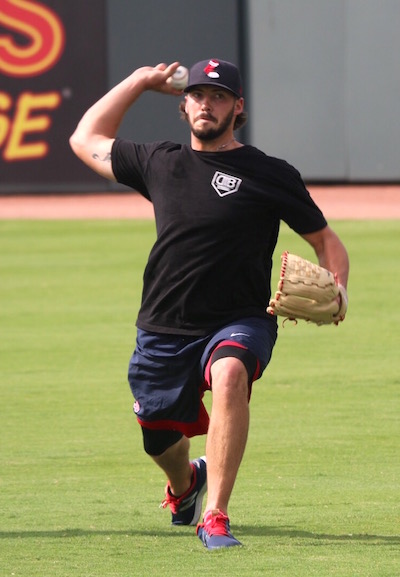 Last year I caught up with Shepherd in Columbus for a series and was lucky enough to watch him pitch. This year our timing wasn’t as good and we took in the first three games of the series before coming home and missed the last one in which Chandler pitched and was absolutely dominant. 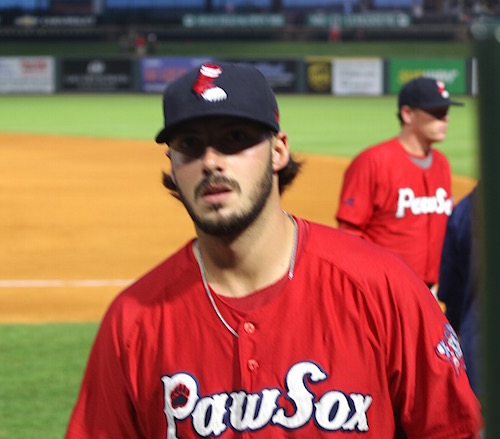 On Thursday night in a game that went into extra innings before the Red Sox lost 6-5. During the game Shepherd was perfect as he pitched 3 and 1/3 innings, facing 10 batters and retiring all 10 while striking out three. He came in with runners on first and third in the sixth inning with two outs and got the final out of the inning. He stayed in the game and pitched the 7th, 8th and 9th innings before coming out of the game. 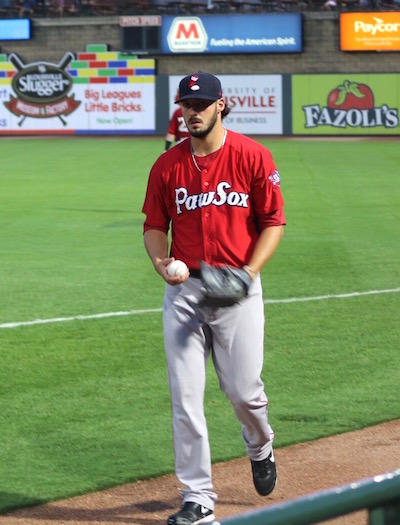 Shepherd has pitched in 30 games, 51 innings, 58 strikeouts, 15 walks all in Triple A Pawtucket.

“… It’s great to be back home in Kentucky, we had a rare off day on Monday and I got to go home and spend some time with the family which is great this time of year. I don’t get to see them much during the season so that was refreshing especially this time of the year when the season is winding down.” We knew back in April that this was an off day so we could plan this out and it was a great time back in Louisa. I got to see everyone plus get a home cooked meal which was nice.” Pawtucket is a long way from Louisa so I don’t get to go back much during the year.”

“… My whole outlook since I have been pitching pro ball and even when I was at Kentucky is that I don’t hang my head if I have a bad outing, I can’t control what happened last week or what is going to happen next week. I thought I threw the ball well on Sunday and it was unfortunate that few baseballs found the grass and a couple cleats crossed the plate but like I said that is baseball and you have to take it one outing at a time.” Next time I’m going to come out with the same mentality and not worry about the last time I pitched.”

“… The spot start a couple weeks ago was very short notice, one of our starters got called up to the Big leagues and they needed someone to fill in and I got the call and just tried to take it like any other outing and do my job and I was fortunate enough to throw well and then turned it over to the next guy.”

“… We have talked about it before, I don’t look at my numbers I don’t get in the website or my phone see what they are. I think they get in the way of what you’re trying to do each day and that’s just not me.” We play 144 games at AAA and the numbers will speak for themselves at the end of the year. I want to throw well and help my team get victories anything else just gets in the way.”

“… It’s such a long season but it really has flew by this year with only a little bit left. I have a great family and they communicate with me by text or phone call just like a lot from Louisa do and that makes it easier to do what I’m doing. I know they don’t get to come much but I know they are supporting me.”

“… I love representing Louisa and love to get back during the winter and say everybody. This year me and my girlfriend are more settled with her finishing school and getting her Masters degree so we will get to come back and spend more time in Louisa.” I love going to the baseball facility and seeing the coaches and players. I have to get my work so I can do it with them. Can’t wait to go back to the high school and see a football or basketball game this season. I’m excited for that. Plus I can run into people I haven’t seen at the birdhouse or Wal Mart.”

“… The big club up in Boston is playing well and have a bunch of good players up there right now and are looking to win a World Series this year so I haven’t heard much from either side. If I get the call I will be ready. Spring Training this year I was invited and first couple days I just tried to fit in, walked over to my locker and it was all set up and things in the big league are little bit nicer and then I was with David Price, Chris Sale and Rick Porcello and the wow factor was there. Those guys are top flight starting pitchers in the majors and I was like a sponge trying to learn and listen and all three were great to be around. They answered all my questions and were true professionals about it. Being around them helped me going into this season.” Hopefully one day I will be in that spot.”

GLENN MOLLETTE: Why Do Some Old People Get Cranky?