Tuesday Night marked the end of the 2017 League with excellent food, a lot of laughs, the recognition of the best of the bunch by category, and finally and most importantly, the Awarding of the Championship trophy.

With a headline as long as the above, I question whether I should just stop. But those who know me will say, “Bill is just getting started.” And yes I am.Tuesday, August 15, could not have been a better day to play golf. It was also a beautiful day to celebrate our year with a spread of food prepared by Troy Hughes and his caterers. The food was sweet, just like Troy’s drives.

2017 was a tough year for our league. We lost two players to injuries and one suffering from personal problems. Other regular players were unable to join because of various problems that life throws at you. Mother Nature did not smile upon us for we lost 5-rounds of golf. However, with all that, this year did set at least two records. Following is a review of 2017. 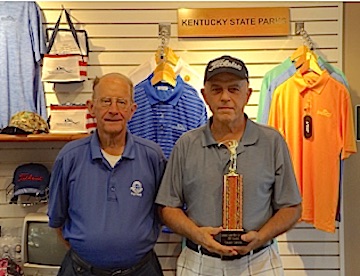 First and more importantly, this is a picture of our league champion Charlie Curnutte (holding the trophy), along with the runner-up, Bill England.

By winning the Championship, Charlie is now the second two-time winner.What makes Charlies’ win so special is that he won the league in the first year it was played, 2006. After two rotator cuff surgeries, he came back 11-years later and wins the Championship again. He was playing from the same tees that he played from in 2006. Charlie is a very deserving champion.

Most know that Charlie was a Kentucky state policeman. He works with Dave Wallen, also a retired trooper and Carl Adkins who is now retired from the railroad. The 3 of them work as bailiffs for the court system. Lawrence County is fortunate to have 3 such trained men to act in that capacity. However, during District Court last week, the 3- bailiffs were summoned to the courtroom by Judge Chaffin. I can tell you that I always enjoyed asking the judge for permission to approach the bench, but never was I excited to be summoned to the bench, especially when I was not in the room. So the 3-bailiffs dutifully marched into the courtroom to stand in front of the bench. Judge Chaffin was presiding, looking very stern and judicial in his robe. Charlie had no idea what he had done, but it didn’t look good for him. To say Charlie was uncomfortable was an understatement.  Then Judge Chaffin, having the power so to do, crowned Charlie Curnutte the champion of our league with a Burger King crown. Charlie was absolutely astounded while Dave and Carl were in hysterics. What a thoughtful gesture made for Charlie by Judge Chaffin.

Bill has played in the league since its inception. Although he has never won the league, he has consistently finished in the top five. Bill will not admit to his age unless it gives him an advantage. I do believe he is older than me. In January, I will be celebrating my 29th birthday for the 50th time. Bill is an excellent driver of the golf ball and a deadly putter. If you can drive and putt, it makes no difference how you arrive. Bill is our vice-president and has held this position since the league began. He would always pull me aside to make a rule change. His reasoning was he and I represent two of the three people on the rules committee.

Now here are the stats for the year.

The most unusual category in the statistics is the Lowest Handicap. We have two players that finished with” negative handicaps: Troy Hughes and Tom Copley. Never before has the league had a player complete a season with a negative handicap, and this year we have two.

If any readers are statistic junkies and you would like to calculate some of the “round averages” divide any gross number by 13 and you will receive the answer to how many pars, birdies, or greens in regulation the player averages for 9-holes.

So what do handicaps do in matches? To give you an actual example, Troy Hughes with his -minus 2 handicap was playing in a threesome. Troy shot a 2 under par 34. This was the low gross for the night. His playing partners shot a net 34 and 35 after application of their handicaps. After Troy added his minus 2 handicap to his actual score of 34, he ended with a 36. The points are awarded on net scores. So the person having the net 34 received 4 points, the player having the net 35 earned 3 points, and poor Troy, who shot 2 under par, had to add his minus 2 strokes to his actual score for a net 36, giving him only 2 points.

Lastly. This will be my last article for the Golf League. I have been the president of the league since the golf course opened. It is now time for me to retire and let some of these young bucks take over. Troy Hughes will be reporting for next year.

In closing, most are not aware of how famous I am at the course. Some of my feats have become legendary. To give you an idea of how far I have come, anyone who knows me will not ride in a golf cart with me driving. On league night, my group is always the last to finish. I am called a slow player but actually I play rather fast. It’s where I hit the ball that slows me down. I am a golfer that gets to see all the course.

The year I won the League Championship, the likelihood of my winning was placed at the same odds of a person viewing a solar eclipse in their lifetime -“Oh, that’s next week!” I have suffered so many unusual occurrences playing Eagle Ridge, my escapades may soon be known as “Jacksonisms” or perhaps “billy-oops.” First, I must admit that all of my travails were my fault, either by action or decision.

My faux pau include: falling over at least five hills, 2 of which I rolled to the bottom, and standing on the edge of a creek, then falling back into the water. Each of these events occurred while I was swinging at a golf ball. The one universal occurrence with all my predicaments, was that my playing partners stood at the top of the hill, or perhaps fell to their knees, laughing. I got neither pity nor help.

Perhaps the worst of all my mishaps occurred when my golf cart was sitting at the top of a hill, with the parking brake engaged. As I went toward my ball, the brake gave way, not an unusual occurrence, and the cart started to roll down the hill, a steep hill. I chased it, and caught it. I grasped the two back bars but couldn’t make it to the brakes. I then knew how a dog felt when it finally grabbed the rear tire of a semi. What do you do? First, I slightly, well perhaps more than slightly, overestimated my strength. I couldn’t slow the thing down, so I did the next best thing, I managed to turn it into a tree. Have you ever had a rear end collision with a golf cart, using your shins and ankles as your bumper? Don’t ever do that. It almost sent me to the hospital.

Lastly, on Monday before the championship, I was out on the course getting some practice. I had pulled up to the tee box on number 12. Turning the wheel into the curb to make sure the doggone cart wouldn’t run down the hill without me, I walked toward the tee. As I look back toward the cart I saw the steering wheel make a little jerk toward the left, another little jerk, and I ran after the cart. I couldn’t get there in time but don’t ever let anybody tell you that you can’t teach an old dog new tricks. I didn’t grab that cart, I stood on the cart path and watched it go 25 feet over the hill until it ran into a tree. Now one would think that that should be the end of the story, a morality tale that illustrated that I had learned something new in my life at my age. But of course this is not the end of the story. I started down the hill and then fell the rest of the way to the golf cart. My clubs were intact and I climbed into the cart see if it would run. It would run but the drive belt had been knocked off so it wouldn’t move either up or down. Of course it could not be driven from the position it was in. So, leaving my golf bag but grabbing my water I crawled back up the hill and reach the cart path. I knew, or hoped, that a ranger would be roaming the course. I was almost as far away from the clubhouse as one could get on Eagle Ridge. So I started walking, walking, walking, panting, panting, huffing, huffing, and finally sat down. There I took a nice drink of water and finally decided that I was the only living creature on this golf course other than the turkeys and the deer. So after walking through hill and dale I finally made it up the hill to number 18 and staggered as I passed the driving range. At the clubhouse I looked down and there were 2 rangers and 3 other people having the best time of their lives. I was almost to the point of having a heat stroke or passing out from exhaustion. The people at the bottom of the hill watched me stagger down. No one came to lend me a hand. When I finally got there I was asked “what are you doing walking in?” It would have been better had they driven a cart up to the clubhouse and asked me that question while driving me back down to my car.

I told them the sad tale and they were all excited to go pull the cart out. The 5 were even more excited for me to go along. That was never going to happen. Anyway as I heard, (because I went directly from talking with them to my car, turned on the air conditioner, and came home to hit the couch) the two rangers and three players, took two golf carts, a Gator, and a long chain and pulled the cart up the hill. The drive belt was slipped back on and the cart was no worse for wear. They put my clubs in the club house and I was ready for golf the next day.

And that’s the news from Eagle Ridge.

I wish each and every one of you a wonderful Thanksgiving and Merry Christmas.

I also thank my readers, if any are out there, for reading my column these last several years. I have enjoyed writing the news and I do hope that the reader found some humor in the writings. It has been a priviledge to write for the league and I am grateful for the Lazer to provide us with an outlet for our happenings.

See you at the course next year.