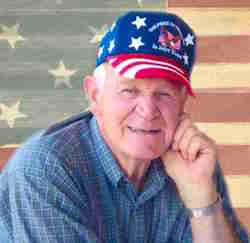 Charles N. Maynard Sr., 82, of Louisa, KY went home to be with the Lord on Wednesday August 16, 2017 following a long battle with Alzheimers.

Charles was born April 17, 1935 at Goody, KY the son of the late Lucian and Eva Vanhoose Maynard Oregan. In addition to his parents he is preceded in death by his loving wife Janet Frazier Maynard who died in 2012 and a brother, William John Maynard.

Charles was a retired operator with the International Union of Operating Engineers Local 181. He proudly served his country in the United State Air Force, and was also a member of the Cherryville Missionary Baptist Church and Richardson F&AM Lodge.

Funeral services will be held on Saturday at 1:00 pm at the Wilson Funeral Home with Rev. Ed Caudill officiating. Burial with military honors will follow in the Maynard Cemetery on Donithan Road Louisa.

Friends may visit the family on Friday from 5:00 pm to 9:00 pm at the Wilson Funeral Home.