Frankfort’s Capitol rotunda once again found itself in the spotlight Wednesday following recent violence in Charlottesville, Virginia. A rally organized by the Pegasus Institute, a Louisville-based conservative think tank, brought together Kentucky politicians calling for the removal of the rotunda’s statue of Confederate President and Kentucky native Jefferson Davis. 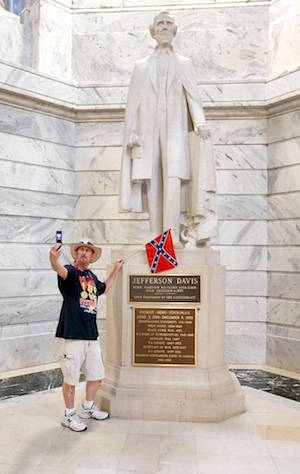 On Saturday, a woman was killed in Charlottesville after a car plowed through a crowd protesting white nationalists who had gathered at a park where a statue of Confederate Gen. Robert E. Lee was slated for removal.

On Wednesday, a small group heard Kentucky state Sen. Wil Schroder, R-Wilder, former Finance Secretary Jonathan Miller, a Democrat, and former Secretary of State Trey Grayson, a Republican, all call for the removal of the Davis statue in the Capitol rotunda.

Schroder, who said the statue belongs in a museum as opposed to a “place of honor,” recalled visiting the rotunda as a child. He said he feared having to answer questions from children today about why the statue deserved a spot there.

By Alfred Miller
The State Journal