UPDATE: On Aug. 10 President Trump declared the opioid crisis a national emergency. A White House statement said he “has instructed his administration to use all appropriate emergency and other authorities to respond to the crisis caused by the opioid epidemic,” the New York Times reports. 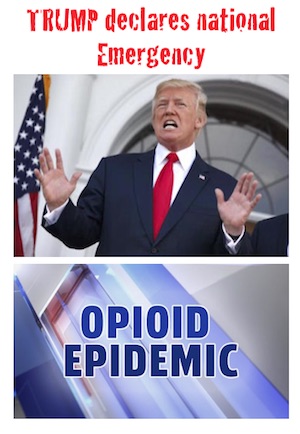 Among other benefits, “the emergency declaration may allow the government to deploy the equivalent of its medical cavalry, the U.S. Public Health Service, a uniformed service of physicians and other staffers that can target places with little medical care or drug treatment, said Andrew Kolodny, co-director of opioid policy research at the Heller School for Social Policy and Management at Brandeis University. He said the DEA might be able to use the emergency to require prescriber education for doctors and others who dispense opioids,” the Times reports.

In a July 31 interim report, the bipartisan White House Commission on Combating Drug Addiction and the Opioid Crisis asked President Trump to declare the opioid crisis that’s killing more than 142 Americans every day a national emergency.

But after an Aug. 8 meeting with members of his administration and health officials, the president declined to do so — yet. “Health and Human Services Secretary Tom Price later told reporters that declaring a national emergency is a step usually reserved for ‘a time-limited problem,’ like the Zika outbreak or problems caused by Hurricane Sandy in 2012. Declaring a state of emergency allows the government to quickly lift restrictions or waive rules so that states and local governments don’t have to wait to take action. Price said that the administration can do the same sorts of things without declaring an emergency, although he said Trump is keeping the option on the table,” Jenna Johnson and John Wagner report for The Washington Post.

Price said the president is giving “incredible attention” to the issue. In a brief address to reporters, President Trump focused on preventative measures, saying that the best way to prevent opioid addiction is to prevent people from using drugs in the first place. “If they don’t start, they won’t have a problem. If they do start, it’s awfully tough to get off,” Trump told reporters at the clubhouse at his private golf club, where he is on a 17-day working vacation. “So if we can keep them from going on — and maybe by talking to youth and telling them: ‘No good, really bad for you in every way.’ But if they don’t start, it will never be a problem.”

President Trump won over rural voters in opioid-ravaged areas with promises to end the opioid crisis by increasing funds for treatment programs and building a border wall with Mexico to stop the flow of drugs into the country. But detractors say little of that has materialized. The border wall is years from completion, and funds for drug treatment may be effectively cut. “Republicans in Congress have proposed cutting Medicaid in ways that health-care advocates say would reduce access to drug treatment for many, and the president’s budget proposal calls for reducing funding for addiction treatment, research and prevention efforts. Several Republican lawmakers who did not vote for their party’s plan to repeal and replace the Affordable Care Act this summer said that the legislation would make it more difficult for their states to combat the heroin epidemic,” the Post reports.

According to the bipartisan commission’s preliminary report, declaring a national emergency could allow lawmakers to waive a federal rule that restricts where Medicaid recipients can receive treatment. The Department of Health and Human Services would also gain the power to negotiate lower prices with the pharmaceutical companies that manufacture overdose prevention drugs. The price on many such drugs has skyrocketed in recent years, hampering the ability of first responders in small towns with small city budgets to respond to overdoses.

FACES OF HOPE: WE DO RECOVER ...Frank McBroom's story