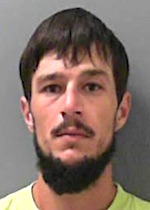 Salmons (the third person arrested in association with connection to a Meth Lab on Wolf Creek) was charged with Operating or Attempting to Operate a Clandestine Drug Laboratories, Pseudoephedrine Altered and Conspiracy.

Stiltner and Parsley were arrested and charged with Possession with Intent to Deliver, Pseudoephedrine Altered, and Conspiracy.

The three suspects arrested were charged with multiple felony charges. They were taken to the WRJ for booking and await arraignment.

Sheriff Thompson once again acknowledged the hard work and dedication of his department and the special units assigned to assist his officers in the battle against drugs.