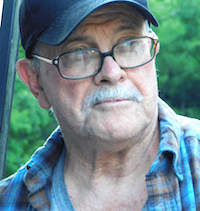 Edgar was born on November 23, 1943 in Martin County, Kentucky to Oscar and Lena Muncy. His family moved to Columbus, Ohio when he was 18 years old. While living in Columbus he met his true love, Mary Elizabeth Collins. They were married on June 1, 1963 and remained happily married for over 54 years.

Edgar’s work ethic was unmatched for over 50 years. His jobs included a laborer at Federal Glass factory in Columbus, Ohio and an underground mechanic at Martin County Coal in Wolf Creek, Kentucky. He owned a logging business and sawmill in Louisa, Kentucky where one of his projects was featured in a national magazine. He could raise a garden, paint a car and build a house. He never encountered a job he couldn’t handle.

Edgar’s family and friends will always remember his love of life and family, his generosity, his sense of humor and his wonderful work ethic. He was an incredible husband, dad, grandpa, brother, father-in-law and friend. Edgar was so much to so many. He will be forever missed and never forgotten.

In lieu of a funeral, Edgar wanted a direct cremation. His ashes will be laid to rest on his property. A memorial service is set for Saturday, September 2, 2017 at his and Mary’s home.