The meeting was called to order after the opening pledge and prayer.

*  Motion by Ron Cordle, second by Mitch Castle to approve the 2016-2017 Budget adjustments. All revenue and expenditures are tracked daily. 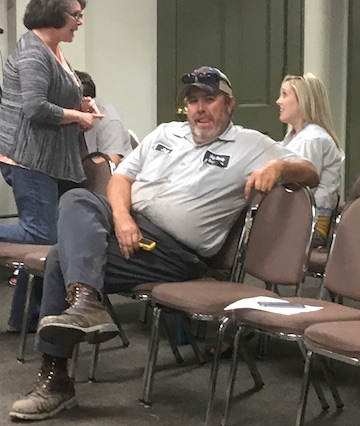 *  The bid for the Louisa Fire Department replacement of air packs went to DILS Fire and Safety of Huntington, WV for $128,524.92.

“This amount is less than the grant the Fire Department received,” Assistant chief, Jeff Kinser said.  “The air packs are MSA brand with a 15 year warranty.”

Motion by John Nolan, second by Ron Cordle to accept the bid. All were in agreement.

*  The bids for the new city buildings which include a salt shed and an equipment building were opened and read. The Council tabled the item because all of the bids were above the estimates given when the specifications were obtained for the buildings.

The lowest bid received was from Rose Roofing and Carpentry which was $22,000 for the salt shed (30×40) and $58,000 for the equipment building. The Mayor said he will check with the company that gave the estimate and communicate that to the Council.

*  The Council voted to approve the Drinking Water Project which replaces the oldest water lines in the city to include Boone, Pike, Lackey, Rice and Pocahontas.

The KIA loan was applied for over a year ago but the city decided not to do another huge project in addition to the Water/Sewer Rehab Project. The loan was $834,000 of which 50% would be forgiven leaving the City to repay $417,000 at 1.25% interest over a 30 yr term.

This project was approved last week by the Utility Board. Motion by Ron Cordle, second by Tom Parsons to approve this project. All were in agreement.

*  Motion by Tom Parsons, second by Matt Brown to approve Grant Source Professionals to assist again this year with the grant application for the Fire Department 2017.

*  A discussion took place about allowing the KY TrailTown Group, headed by Cathi Kise Wells, use of an office space within the Louisa Community Center. Louisa /Lawrence County is excited about applying for Trail Town Certification, Mayor Slone said.

“As of 8-29-17 Kentucky Liquor Laws will change. The new law could possibly allow local city councils to approve or prohibit the sale of alcohol, by the drink only. Also, the 50% Food Consumption Rule no longer applies.”

The City Council voted to prohibit the sale of alcohol by the drink (as in a bar or nightclub). Motion by Mitch Castle, second by Lisa Schaeffer. All were in agreement. The City’s Ordinance will be amended and brought forth at next month’s meeting.

*  Adams also updated the Council on the Deed prepared for the 167 sewer easements acquired by the city from the county. Motion by Ron Cordle, second by Matt Brown. All were in agreement.

The Council then went into Executive Session to review actual litigation and the purchase of real property. Upon return, Adams said that the Council had given him instruction on how to proceed with the possible real estate purchase.