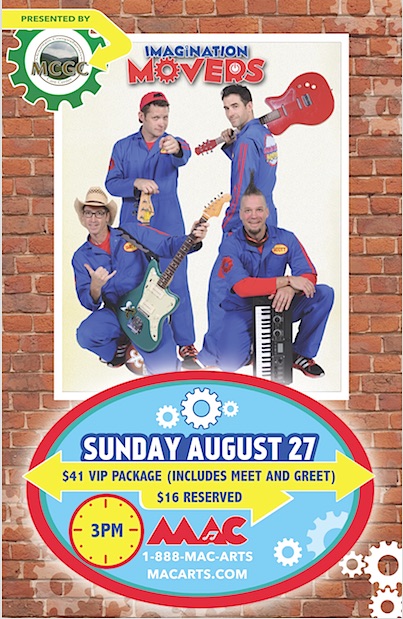 The former Disney Jr. Stars are one of the most popular touring acts over the last decade. They are the top rated and best reviewed family show according to Ticketmaster. The Movers have appeared on “The View,” “Live with Regis & Kelly,” and “Good Morning America.” They have had the privilege of performing at the White House for two different presidents.

MAC Executive Director Clayton Case says he is excited for the different show.

“One subject type of programming that we placed near the top of the list to add this year was a family or children’s show. When we saw Imagination Movers, we loved the high energy and the way they incorporate rock and pop music into education.”

Rich Collins, Scott Durbin, Dave Poche and Scott “Smitty” Smith make up Imagination Movers. In 2003, the four friends residing in New Orleans started gathering after their kids’ bedtimes to brainstorm and write songs about a kids television show. Two years later, they were the sensation of their musical city, attracting parents and children alike with an eclectic pop sensibility and lyrical turns about healthy snacks, playing catch, and conquering childhood fears of bedtime.

In 2007, The Movers partnered with Disney and filmed seventy five episodes of their Emmy Award winning series over three seasons. The show has aired in more than 55 countries and they’ve sold half a million CDs and DVDs to date. Critical acclaim for the Movers includes nods from Entertainment Weekly and The New York Times, which reported the Movers are “prized by many parents for non-condescending lyrics and music that evokes the Beastie Boys or Red Hot Chili Peppers.”

Imagination Movers, sponsored by Mountain Comprehensive Care Center, will be Sunday, August 27 at 3pm at the MAC in Prestonsburg, KY. Tickets are $16 reserved or $41 for a VIP package that includes a meet and greet. To purchase visit www.macarts.com or call 1-888-MAC-ARTS.

The Mountain Arts Center is the premier performing arts venue in eastern Kentucky.  Located in the heart of the bloodline of the Country Music Highway, the facility features a 1,050-seat auditorium, conference/meeting facilities, instruction rooms and a state-of-the-art recording studio. Operations are through a partnership between Prestonsburg, Ky. and Big Sandy Community & Technical College. For more information, call 1-888-MAC-ARTS or visit macarts.com.