Louisa Rotary met for its weekly meeting on Thursday, August 3rd. The meeting began with a prayer for our community, The Pledge of Allegiance and reciting the 4 way test. After the traditional beginning, the club recognized Circuit Clerk Jodi Parsley’s wedding anniversary and the birthday of Dr. Rob Fletcher.

*  Club business this week was all about the Rotary Auction and how successful it is doing.

*  The Rotary Septemberfest committee is getting geared up and a board meeting will be held next week to work out details.

*  The first day of school in Lawrence County was a success according to Dr. Fletcher except for a couple of incidents, one being that a school bus had experienced a hit and run. Fletcher said nobody had been hurt in the incident. He also spoke on the new chrome books that each high school student received and how different the classrooms looked with them. On that subject he explained that handwriting has been brought back to the Lawrence County schools. 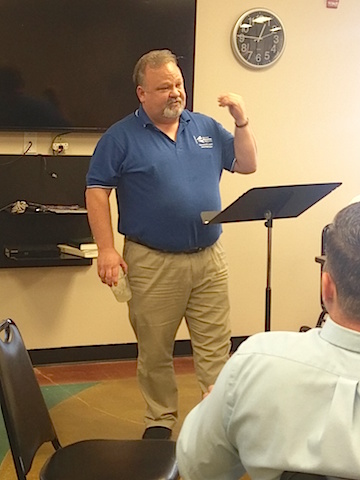 The speaker for the week was James Ellis, the Director of Adult Education in Lawrence County. After 19 years of being involved with the program he reported that the numbers of adults getting their GED and continuing their education was up 23%.

Ellis explained how rewarding it was to see one of those adults now working for the board of education. Ellis recently wrote and received a grant from the Dollar General Literacy Fund to help with the costs of the program.

Mr. Ellis also touched on another job that he was so passionate about, calling L.C.H.S. sports for Lycom. He was proud to brag on some of those programs, “Lawrence County has 76 boys on the football roster this year, I believe that is the most we have ever had!” He explained how great it was to watch their first day in full pads. He also bragged on the basketball and soccer teams.

He said that Lawrence County was literally brought together as a community when it comes to sports. He recalled going to watch the basketball team at Rupp Arena, “for such a small town it was amazing how the crowd lit up in red and black!”

With the end of the speech, the meeting was adjourned for the week.

Growing up in Louisa – Who Remembers?