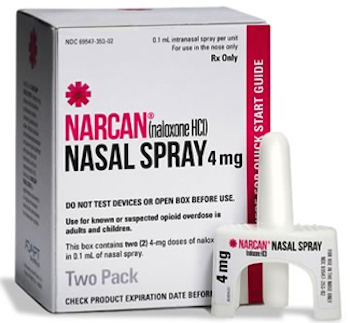 Health department Director Thursa Sloan reports that 61 people received free Narcan (Naloxone) training and kits that contained two nasal doses of the drug, which can temporarily reverse the effects of an opioid overdose.

Reporting that most of those in attendance were first responders, emergency management officials and fire and police officials, Sloan said in a statement, “It is important that our emergency responders are trained in Narcan administration not only to be able to give in the event of an first response for opioid overdose, but to rescue a first responder who has been exposed to opioids during operational situations.”

That is why Floyd County Sheriff Sgt. Roger Shepherd came to the training while he was off duty.

“She (the trainer) told us we would have to look for indicators (of overdoses), but most of the time, when we show up, we’re already told that they’re overdosing,” he said. “It just gives us the advantage of being able to maybe bring them back until a first responders can get on the scene and take it from there.”

In his 11 years of his service with the Floyd County Sheriff Department, he has seen “countless” overdoses.

“I can’t even recall, to be quite honest,” he said. “At least 40 to 50, and that’s just me giving a rough estimate. And it’s went from, you know, just regular pain pills to, now, stronger medications….It’s pretty scary.”

Prestonsburg resident Jennifer Howard, who works as a therapist with the Behavioral Health Group, also took the training and got a free Narcan kit.

“I’ve been in this field for five years,” she said. “I do therapy. I do counseling, so I don’t know much about this. I’ve seen it administered before in the hospital, but I just want to learn more.”

Jennifer Little, public information officer and training sergeant at the Floyd County Emergency and Rescue Squad and employee at Big Sandy Community and Technical College, took the training and received a free Narcan kit so she can be prepared to use it if the need arises.

“Anytime you’re involved in any sort of rescue, fire department rescue, anything like that where you come in contact with the community, any training that you can do to help you be ready to help your community is definitely something you need to do,” she said.

Dr. Jody Jaggers, PharmD, director of Pharmacy Emergency Preparedness for the Kentucky Pharmacists Association, said the Narcan community outreach and communication program, which is sponsored by the Kentucky Department for Public Health, is geared to save lives.

“In Kentucky, I think everybody has been touched by overdose or the opioid epidemic in some way, shape or form, and, you know, the eastern part of the state seems to be disproportionally hit with that, and Naloxone, right now, short of not being an addict and, of course, not having the overdose, is the only way to save somebody is getting Naloxone in their system,” he said.

Over the past several years, opioid treatment has soared in Floyd County, which was recently ranked as seventh among the top 10 counties nationwide that have a high density of physicians treating a high volume of patients for opioid use disorder. Eight of the other nine counties in that top 10 ranking were also located in Eastern Kentucky.

The Kentucky Office of Drug Control Policy reports that 86 Floyd County residents have died of drug overdoses since 2012, and 14 of those deaths occurred last year.

When asked if there were any dangerous side effects to giving a person Naloxone/Narcan, Jaggers said it has “no pharmaceutical effect” in the body unless a person is allergic to it or the person given the drug has opioids in his/her system.

His wife, who trained participants on the use of nasal Naloxone (Narcan), urged any person who administers the drug to call 911 immediately, saying that it forces an overdose victim to go into withdrawals and medical assistance is required.

The event in Prestonsburg marked the Kentucky Pharmacists Association’s 20th in the state and officials had more than 100 Narcan kits to distribute to Floyd County residents.

“We’d really like to see moms, dads, grandmas, grandpas, brothers, sisters, people like that because, odds are, they’re going to be the ones that will truly be the first responder if something like that happens and they stumble on their loved ones,” he said. “So, it could be in their hands and they can buy time, you know, after you call 911, to get someone there.”

Kentucky was the first state to authorize the sale of Naloxone/Narcan without a prescription. In Floyd County, local residents who know someone at risk for an opioid overdose can buy Naloxone/Narcan without a prescription at both Rite Aid locations in Prestonsburg. Pharmacists on staff will show customers how to appropriately use the drug, a spokesperson said.