Some states use goats to mow along highways, saving money and decreasing herbicide use… 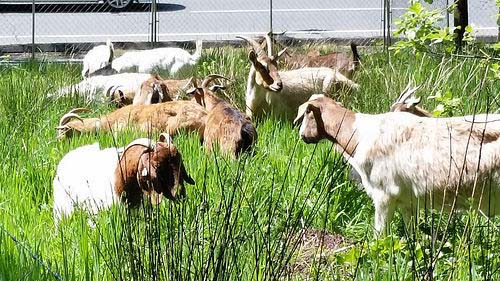 Goats can do more than provide milk and meat: their dedication to chomping grass and weeds, and their nimble feet, have earned them a spot cropping along road rights-of-way in at least seven states. It makes sense, Frederick Kunkle reports for The Washington Post.

“Goats take pleasure and sustenance from their work in ways that people don’t. Goats don’t talk back, they don’t demand 401(k)s or pensions, and even their lunch breaks are productive. (They do get health care of a sort, at least in Maryland.) Sure, robots might do the job someday, too — but would you eat their cheese?”

Doug Hecox, a spokesman for the Federal Highway Administration, told Kunkle that goats are “one of the greatest unsung heroes on the American highway.” States that use goats to maintain roadways include California, Hawaii, Idaho, Maryland, Nebraska, North Carolina and Washington. They say goats are cheap and better for the environment than herbicides.

Maryland began using them in 2009 when endangered turtles were discovered living near a highway under construction. Pesticides couldn’t be used on that stretch, so the state brought in goats. They cost the state $6,300 per year, including vet bills, and the state is considering expanding the program.