AEP plans to eventually own Okla. wind farm that will be nation’s largest; trend in power industry 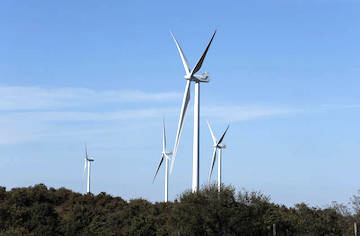 Two Oklahoma subsidiaries of American Electric Power Co. are betting $4.5 billion on a project to pipe energy from—and eventually buy—a huge wind farm under construction in the Oklahoma panhandle, Paul Monies reports for The Oklahoman. The 2,000-megawatt, 300,000-acre Wind Catcher Energy Connection facility in Cimarron and Texas counties will be the nation’s largest when it’s completed, probably in late 2020. AEP must get approval from federal regulators in Oklahoma, Arkansas, Louisiana and Texas as well as from the Federal Energy Regulatory Commission to purchase the plant, and is expected to file plans with them on July 31, Bloomberg News reports.

As part of the deal, Invenergy will build the farm with GE wind turbines and own it for the first five years of operation, at which point the utilities will assume ownership. From the beginning, Public Service Co. and Southwestern Electric Power Co. will get a dedicated 765-kilovolt tie line to send energy to a substation in Tulsa, 350 miles away. PSO will get 600 megawatts for its 547,000 customers in eastern and southwestern Oklahoma, while SWEPCO will get the other 1,400 megawatts for its 530,000 customers in surrounding areas of Arkansas, Louisiana and Texas. PSO and SWEPCO told Monies that “the project will support about 4,000 direct jobs and another 4,400 indirect jobs during construction. It will have about 80 permanent jobs once it’s operational. Local schools and counties in the Oklahoma Panhandle will receive about $300 million in property tax revenue over the life of the project.” 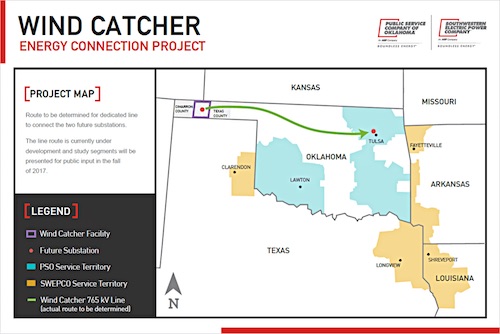 In Oklahoma, long a fossil-fuels hub, the shift to wind energy is significant. “With the additional wind capacity, renewable energy will make up 40 percent of PSO’s generating capacity by 2021. The utility already has 1,137 megawatts of wind — 22 percent of total capacity — through various power-purchase agreements,” Monies reports. It’s also an example of how utilities wanting to grow are increasingly looking to wind and solar. As demand for electricity is weakening and the cost of building solar and wind farms is decreasing, utilities are buying the farms outright and passing the cost of acquisition on to customers, Bloomberg reports.