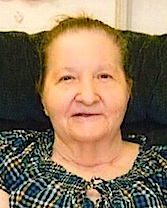 Dorseen was born January 20, 1947 in Blackey, Kentucky a daughter of the late Steve Griffie and the Late Drucilla Pratt Griffie Halcomb. Dorseen was a retired laborer for Honda.

In addition to her parents, Dorseen was preceded in death by her step-father, Emery Halcomb.

Funeral services will be conducted 11:00 am Saturday, July 15, 2017 at the Young Funeral Home Chapel with Rev. Mack Ray Cyrus officiating. Burial will follow at the Snow Cemetery, Genoa, WV.