This is Tom Lykins’ thank you to Louisa for being so kind to him for 45 years. He typed it all himself… 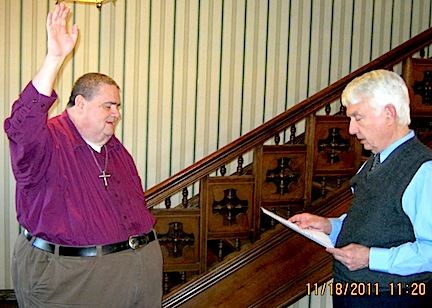 I was at Goodwill Industries in Dayton, Ohio for vocational
evaluation. Little did I know that, as soon as I went home to Springfield, a distance of twenty-five miles, my life would change forever.

Many of you have read the chapter in my memoirs so I am just going to hit the highlights as it were.

Back in April of 72, I started my vocational evaluation and training at Goodwill Industries to ascertain what fields of endeavor that my aptitudes might be suited for.

Of course, I wanted to go into a field that few blind people had ever entered. I was told by my counsellor and other staff at Goodwill that I was being very unrealistic and very immature about my goals and aspirations.

“Blind people just don’t do what you want to do.” We will never support you in this endeavor.

I knew I had a most difficult road to hoe and I had no idea how I was going to accomplish this.

During the Christmas holiday of 1970, my late brother John Lykins visited back in Springfield and heard me dispatch on the scanner.

He was enthralled with my ability to do this vocation.

When he came up for a visit in 72, he insisted that I accompany him to visit all of his friends in Springfield which I did.

It should be noted that he was dying of an inoperable tumor of the brain which was cancerous. In looking back, it was his way of saying goodbye to all of his friends.

In our journeys around Springfield and Clark county, we stopped off at Ferncliff cemetery several times and went to the grave of our Father. I can still distinctly remember what he told me; he said:

“Son, when a man hangs around these places, he knows that it is not long before he will be there himself.”

On Monday, Memorial Day of 72, he and my other brother Jim took me back to Dayton to continue my classes at Goodwill. At that time the male clients were housed at the YMCA on Monument Avenue in downtown Dayton.

I learned later that all my brother could think and talk about was that he felt I was not safe in Dayton and he did not like it at all. At that time, he took it upon himself to do something about this.

When he returned to Louisa, his quest began.

He, along with Shirley Wells worked together in electrical contracting. Additionally, he worked for the city and Mayor J. Howard Queen.

During the course of a conversation, Mayor Queen lamented that the Sesqua – centennial was fast approaching the first week of July and he needed all men on the street to be patrolling for the large crowds that would be coming to Louisa. He further stated that he needed someone to dispatch at City Hall. The Mayor was unsure what to do about the situation since the dispatchers were paid only $1 per hour at that time.

My brother then told him about me. The Mayor was interested and asked if I would come to Louisa. My brother didn’t know and said he would have to check to see if I would.

Little did I know when I answered the phone in Springfield that it would be job offer. I was scared to death. Other than my brother and his family, I knew absolutely no one in Louisa or Lawrence county at all.

I knew I had no choice. I had to accept the offer for two reasons.

First, to prove the people in Dayton wrong and second, because I got a job in the vocation I wanted.

My brother Jim, mom, Jim’s wife and infant son brought me to Louisa.

My brother lived near what is now known as the Rich Creek boat dock and brought me into town Saturday morning. When we first came to the Police station at City Hall, it was like nothing I had ever experienced in my life.

It was the most informal facility I had ever been in with respect to a police facility. The doors were wide open and anyone could just walk in on who was ever working there. The dispatcher was stretched out in an old recliner listening to American Top 40 countdown with Casey Casum on WKEE.

For the sake of brevity, I will not recount all that transpired other than to say on my first day, I had visits from the Louisa City Council and the mayor along with other city and county dignitaries. I was totally impressed and astounded that they would come and see me. Who was I? No one special that’s for sure.

I couldn’t believe it.

I was literally turned lose on the radio and phones and hadn’t been there two hours. The next day, I was doing this all by myself.

One of those who greeted me was our City Attorneys Father Eldred Adams. Then there was police judge Tooty Van Hoose. Louisa and its people have been most kind and gracious to me personally. I don’t know why, but they have.

I want to truly say that I have appreciated your kindness and generosity to me for these forty-five years. Frankly, I don’t feel that I have deserved all of these kindnesses that have been bestowed upon me by many citizens of Louisa and Lawrence County.

O yes, like you, I have had my trials and tribulations and have crashed my plane several times. But, thru the strength from God, he has helped me to rebuild.

I want to say: “Thank you Louisa for everything.”

For the first few years I was here, I was at City Hall more than at my own home. The days could be long and hard and the hours long but, I made it.

There have been several times in the past years I had thought of leaving Louisa but, where would I go? I had a job offer three times from the Taylor County 911 center in Campbellsville, Kentucky but declined.

Charlie Shaw and Betty Chick were the two who wanted me to come there desperately. For some reason, they were impressed with my knowledge of Tele-communications and the techniques employed behind it. As they said to me, “We are looking for Talent.” Why they selected me I can’t say. However, whether or not it was comfortable or whether or not I was afraid, I don’t know.

Something said, “Stay in Louisa.”

Looking back, I can see it was God’s hand telling me that my work for Him was here.

At this point, I probably should end this historical reflection on my tenure here. I plan to stay here as long as the Lord allows.

Among my other accomplishments not of myself neccessarily but with help from others, were my terms on the Louisa City Council and the Board of Water and Sewer.

I could sit here at my keyboard and write for hours and hours but I know you wouldn’t read the material as you don’t have enough time with your other activities, jobs, family etc.

I just wanted to put something down in writing and express my feelings to all who have made it possible for me to be the success that I was permitted to be.

When I came to Louisa I heard it said that you had to have lived here at least twenty-five years to be accepted. Well, I have exceeded it by twenty. Hopefully, I have been accepted by some of you.

God Bless all of you.