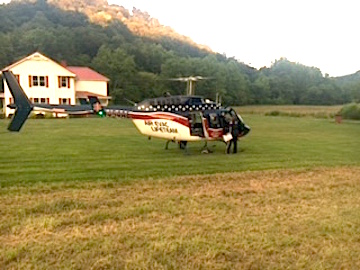 At approximately 8:00 P.M. on Thursday June 29 Lawrence County E-911 received a report of an ATV accident in the 1000 block of Brushy Creek Road.

Noah Thompson, 15 year-old son of Chris and Amy Thompson, sustained a partially collapsed lung, cracked neck and broken ribs, however according to his mother,  he is doing much better today (Friday) and his lung seems to have healed. 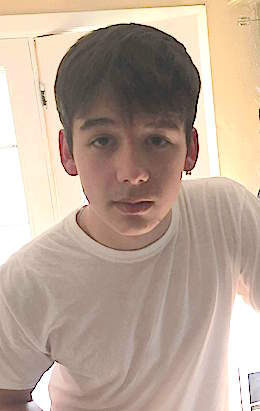 him approximately 60 additional feet from the ATV.

The patient was transported from the area and taken to an awaiting Air Evac helicopter that had landed in a nearby field and flown to a trauma center in Huntington, WV.

“…He’s in Cabell. At 6 this morning they were still thinking they would have to do surgery on his neck today because of his cracked vertebrae. And also a partially collapsed lung because of broken ribs they thought they would have to put a tube in. He also had a gash with exposed bone in his leg they put 2 layers of stitches in. By noon his X-ray on lungs showed NO puncture!! And surgeon came in and said no surgery on neck. He just has to wear a brace for 8 to 12 weeks!! Now we just have to let him heal! To be thrown over 60 ft he is a miracle. Thanks to Kenny Dixon and Stoney Harper they were the first to get to him and they kept him still and awake and wrapped his head and leg! They were amazing! Can’t thank them enough for how fast and awesome they reacted. God has truly answered our prayers and so many ppl praying made ALL the difference. We love our awesome little community!”

Growing up in Louisa – 4th of July?