NEWSPAPER REPORTS CONN HAS LEFT THE COUNTRY WITH FAKE PASSPORT 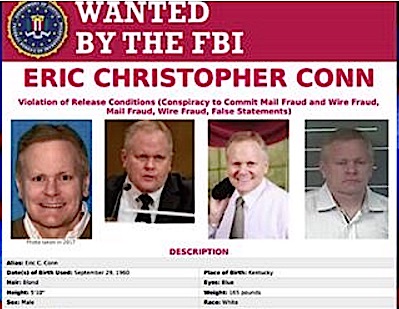 Through an e-mail exchange with the newspaper over the weekend, Conn told the Herald-Leader, he also has help from someone overseas who gave him a job to support himself while on the lam.

In the e-mail, Conn explained that he flew to a country that does not have an agreement to extradite people wanted for crimes in the U.S.

Conn said he used the fake passport to fly out of the U.S. the day after cutting off the monitor.

In efforts to verify the Conn’s email, the Herald-Leader asked him questions they thought only Conn could answer. The questions included his Social Security number, which the newspaper obtained from a court document, and a specific detail about one of his marriages. He answered the questions correctly.

Although many believed Conn had money stashed overseas to live on after fleeing, the email claimed that isn’t fact.

“The money I sent overseas was money that has long since been spent,” Conn explained.

The evening of June 2nd, Conn cut off his ankle monitor, threw it out beside Interstate 75 near the Newtown Pike exit and fled.

The Herald-Leader reports, Conn would not say where he went but made a reference in one email to fleeing to another continent.

“Don’t forget, thanks to my enforced ‘sabbatical’ at home, I now speak three languages,” Conn said, meaning he had time to learn a language while on home detention.

Conn said he used his credit card to buy a ticket to fly out of John F. Kennedy International Airport in New York, but never intended to go there because of the likelihood the FBI was monitoring his transactions. Conn says he used a different, pre-paid credit card to buy a second ticket and used that one to leave the country.

Conn explained that his escape was not dramatic.

“If my leaving would have had more of a spy-like characteristic to it, I would be the first to say so. It would certainly make for a better story,” he said in the email to the Herald-Leader.

Conn says the job he has obtained doesn’t pay much but gives him a chance to support a cause he believes in, and is not a traditional legal job but involves writing. He continued by explained that he would not be able to live outside the country indefinitely with the money he has, which is why he needed the job.

Conn wrote in his latest emails to the Herald-Leader that he had not surrendered because the FBI had not accepted his terms.

“No, I do not presently plan on returning,” he said in response to a question.