Officials take aim at company over request filed with Kentucky PSC; Asking for elected PSC members instead of appointed 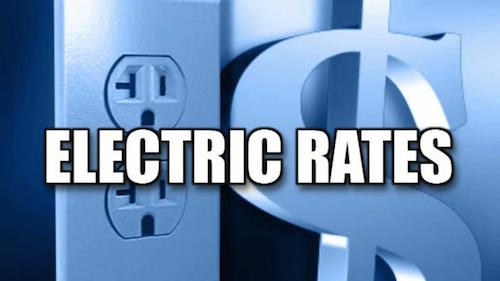 A proposed Kentucky Power rate review which would result in a 16.8 percent hike in electric bills for area residents, has local and state officials in an uproar.

The rate review was announced in a statement released by Kentucky Power Tuesday afternoon, citing a decline in customers due to the “struggling economy.” The company filed an adjustment with the Public Service Commission (PSC) which would institute a spike of more than $69 million from Kentucky Power customers.

“This is flat-out wrong. Our people and our local businesses cannot absorb any more power bill increases,” said Sen. Ray Jones in a Facebook post Wednesday afternoon. “I have opposed AEP’s prior rate increases and will oppose this rate increase as well.”

Sen. Jones shared his statement alongside a photo of Wednesday’s edition of the News-Express, saying, “Until ratepayers have a voice in the process, this will likely continue. Asking for a 16.8 percent rate hike with our current economy is simply being out of touch with the realities facing out region.”

Friday afternoon, Jones shared with the News-Express that this hike would be a “substantial burden.”

“It’s going to be a substantial burden on an economically-distressed area that I don’t think we can withstand,” said Jones. “It’s to the point where people, particularly people on a fixed income and people who have been out of work, are simply unable to pay these power bills.”

According to the statement from Kentucky Power, the rate increase comes in the wake of many industrial/commercial businesses leaving the area or shutting down. The previous rate system was set up to allow those businesses to shoulder more of the rates, shifting some of the burden off of the residential customers. Now that those companies are no longer in the area, Kentucky Power is placing those extra portions onto residential owners.

“The argument is they’ve lost industrial customers and residential customers, so therefore they need to make that revenue up. But somebody could make the argument that they’re also providing less power and that they’ve got less customers to serve,” said Jones. “Therefore, they don’t need as much manpower and it should be reducing the amount work they’re actually doing. If that’s true, if they’re losing revenue, join the club. Join the club of every business in this region. You can’t tell me a single business that’s not been affected by this economic downturn.”

“I filed House bill 455 and House resolution 109 earlier this year to address the unconscionable power rates we are seeing in Eastern Kentucky. I plan to refile these pieces of legislation for consideration in 2018,” Rep. Harris said on Facebook Thursday morning.

Harris also shared a message he received from a concerned constituent. He addressed the concerns, saying that he will continue to fight for Eastern Kentucky.

“I’m getting these messages more frequently and will continue to oppose not only future requests for increases, but also the previous increases which need to be revisited,” he said.

Hatton echoed Harris’ sentiments, saying nine out of every 10 calls and messages she has received recently have been about electricity rates.

“People are furious because (Kentucky Power) no longer buys Eastern Kentucky coal and Eastern Kentuckians are paying riders and extra fees to help them replace the coal-fired plants with the natural gas. Natural gas is supposed to be cheaper, but people are infuriated that their electric bills aren’t cheaper,” said Hatton.

“I personally asked the representatives at AEP, ‘Is your longterm goal to ever include coal again?’ And they assured me that, no, they do not intend to burn coal — that natural gas is the way they’re going. My follow-up question was, ‘Does that mean our electric bills will go down? If you’re going to use natural gas that’s cheaper for you, why are our rates increasing at such rapid, ridiculous rates?’ I got no answer,” Hatton added.

However, since Ky. Power has a monopoly in the area, Hatton said she recognizes that it is time for the voices of the people to be heard.

“We don’t have any option, we don’t have competition; we don’t have anyone to turn to. We’re held hostage by these rates,” said Hatton. “So, unless the PSC- and they have an Eastern Kentucky member of the PSC who surely knows what his neighbors are going through- can do something about it at this point in time, we’re going to continue to be hostages.”

According to Hatton, the people of Eastern Kentucky are doing their part and it’s all leading back to the same place: the Public Service Commission.

“There are several different approaches we can take. As far as the most important, we need to make sure they understand it’s not going to be tolerated. We have to make sure we’re a united voice for our constituents- and that is the case,” said Hatton. “Republicans and Democrats alike came out and signed the bill (HB 455). So, it was a bipartisan cry for them to do something better. We can monitor, we can meet; I’ve had several meetings with AEP so far. We can ask for help. But in the end, we just have to have a PSC that will stand up to them.”

According to Hatton, the appointed representatives in the PSC are the ones who have to make a change.

“Ray Jones introduced legislation (SB 167) to cause our PSC to be elected rather than appointed, but I don’t even know if that’s the answer. Once people are elected, money influences elections. And AEP has more of it than the average citizenry to affect the outcome of a PSC election,” Hatton said.

“First, I filed a bill in three different sessions to create an elective PSC. This past session, I filed a bill that would allow ratepayers to petition for a recall hearing by the PSC,” Jones added.

According to Jones, allowing the PSC to be an elected as opposed to an appointed title could change things.

“If the public had a voice in choosing the PSC, they might not be as quick to run out and pass a rate increase. Right now, most of your members of the PSC have been lawyers, former legislators, typically people from big businesses,” said Jones. “When we came close to changing the way we elect the PSC, it died in the House of Representatives because the Kentucky Chamber of Commerce actively started lobbying against the bill.”

Jones said that the lobbying was the chamber’s way of showing loyalty to one of its larger corporate members, since Kentucky Power is a big donor to the Kentucky Chamber of Commerce.

Jones and Hatton both said that money was a big factor in this ongoing issue, saying that one company had it all, while the struggling local economy had far less influence and no options.

“One of the problems is that the Attorney General doesn’t have the resources to go out and call the expert witnesses that are needed to analyze and fight these rate cases. The Attorney General just doesn’t have the funds to do that,” said Jones. “That’s something else we’re gonna have to look at. You’re dealing with a multi-billion dollar company and you’ve got an Attorney General with a budget of less than $10 million a year trying to take them on. There’s no real resource that’s available to hire experts. Utility companies have the resources to hire experts and lawyers and so forth, so there’s really nobody to challenge their decisions.”

“I think the timing is very unfortunate. It’s almost like they’re thumbing their nose at people who have already cried ‘please, slow this increase down.’”

The Senator and Representative both said that the public cry was in this matter is important. Jones said he would keep fighting and encouraged his constituents to do the same. Hatton says locals should continue to be vocal about the injustice.“I think (the public is) doing everything that they can; they’re absolutely being very vocal to their local officials,” said Hatton.

Rep. Harris tweeted out a message Thursday afternoon, urging his constituents to sign the Rate Intervention Form. This form serves by allowing constituents to voice their grievances relating to the rate climb.

The form can be found at: Secure.Kentucky.gov/FormServices/AttorneyGeneral/RateInterventionForm.