PARKS AND ROE MAKE ALL AREA, BOTH PARTICIPATED IN ALL STAR GAMES THIS WEEK

Louisville, Ky. — Senior to be Brad Parks and junior to be Austin Roe were recently selected to the All-Area team by the Daily Independent and also participated in the KHSBCA East/West showcase held at Pleasure Ridge Park high school on Tuesday and Wednesday of this week.

On Tuesday and Wednesday afternoon each player took infield or outfield practice, batting practice and ran for the 20 some college and pro scouts in attendance. 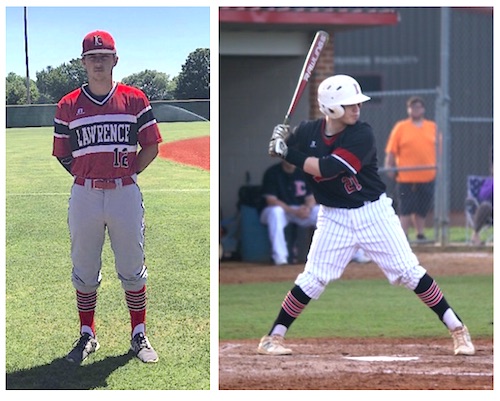 Each evening the teams played two seven inning games. On Wednesday Parks played 2nd base in one game and shortstop in the other. He had one RBI and scored one run even though he didn’t pick up any hits Parks hit the ball right on the nose.

On Tuesday afternoon Austin Roe went through the same process with the Sophomore team and did really well in the showcase before the games. Roe went hitless but was HBP and scored a run. He caught five innings of both games and had a nice tag at home to save a run.

“… Yeah I had a great time! It was an awesome experience to get to play with some of the best players around the state.” I hit decent during the actual showcase, hit a couple to the wall and hit a lot of line drives but when the games started the only thing I could do was hit line drives to the 2nd baseman.”

“…It was definitely odd being on that side of the infield because everything’s different, rounding ground balls aren’t the same, the throw isn’t close to being the same. Overall I liked it pretty well, but I love the left side of the infield! Overall it was a very fun and relaxed game.”

“… Just all around fun and awesome experience. Loved being around great players and facing good opponents. It also feels good to get exposure at events like this.

“…Wish I had made more noise at the plate today,but I had a productive day offensively and defensively.”