Fort Gay, W. Va. — Former Tolsia football standout Jordan Johnson has signed to play football and continue his education at West Liberty University a Division 2 school. The Hilltoppers went 4-7 last season while playing in the Mountain Conference. The school is in West Liberty, W. Va. and is about four hours from Fort Gay. 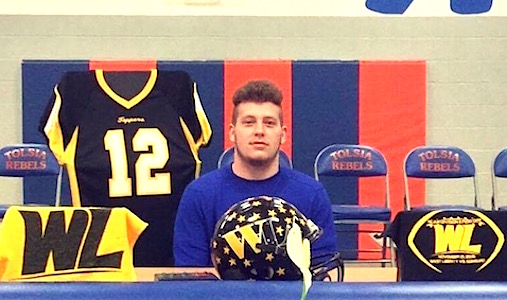 Johnson recently played in the prestigious North/South all star game held at Laidley Field in Charleston. Johnson played really well at the defensive end position even though his South team lost 10-7 in a low scoring affair. Johnson blocked a punt, had 4 sacks and a pass deflection.

“… It was a great experience for me, I made a lot of new friends that I will never forget for the rest of my life. I was coached by great coaches that taught me a lot of things to make my game better. It stunk that we couldn’t get the win, but overall I’m just blessed that I was able to play in this game and represent my school.”