Growing up in Louisa – Father’s Day! 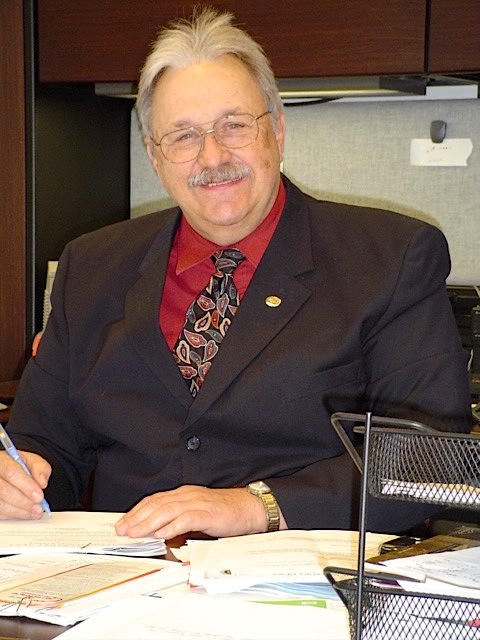 What can a person write about Father’s Day when they grew up without one? I suppose I could lament about what I missed, although at the time I didn’t feel an absence. It would be decades later that I would realize that having one would have at least given me a head start in life. It wasn’t that I was stupid, but rather I didn’t get certain levels of understanding that might have benefitted me. For example, choices in careers and the steps I would have to take to set and accomplish goals. I was left to figure that out on my own. Lessons came from the costly mistakes a novice cannot help but make. Aside from that, and some potential financial support, I didn’t have my own male model to emulate other than some great fathers that my friends had. These shortcomings were eventually overcome, but not without some luck and determination.

So why would I celebrate Father’s Day? Well, to start with there are many wonderful fathers out there that work hard providing for their families, and doing the best they can. As I matured, I was surprised how important fathers are to their sons and daughters. Never having one, I simply didn’t see them as relevant or necessary. After all, there are many fathers out there that aren’t all that relevant. Some spend their lives developing their careers and spend very little time interacting with their families. Many bring wrong attitudes or are not models of good behavior. Some promise and don’t deliver. Others just refuse to take responsibility and walk out leaving mom and the kids to deal with life as best they can. 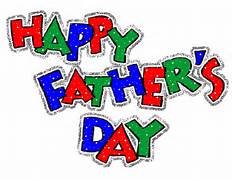 But there is a point to writing this article. I want to honor those dads who accept that role and refuse to ‘buy into’ the misleading dogma that society teaches. Men are so susceptible to those lies that cause them to turn their backs. I know that from my own mistakes early in life that this is true. If I had a model of a real dad when I was growing up it may have saved me from errors in judgment that gave me regret instead of joy. After all, dads are subject to the pressures to grab all they can out of life. Sadly, many give up and walk away from their responsibilities to try to live the fantasy life portrayed on television and movies. By doing so, they seek out momentary pleasures and lose out on those things that are truly fulfilling and worthwhile. The stronger fathers, usually trained by a real dad, pass this gift on to other generations. These dads deserve to be honored.

Nearly any man can become a father. It takes a real man to be a ‘dad.’ It is a smart father that devotes himself to his family. I’m talking about the guy that remembers his pledge to the wife of his youth and refuses to stray. It is this guy who makes a difference in how his children see life, and later follows his example. Kids will follow their dad’s example long before they obey his rules. It’s isn’t what he says, or enforces, but how he, himself, behaves. That can be best taught by a father in the home.

When I took some psychology classes nearly fifty years ago, I learned about studies that showed that daughters grow up happier when they have their father in their home and active in their lives. Those positive dads go to the recitals, ballgames, concerts, plays and special events. They teach their daughters how to be ladies and to honor themselves. Those dads protect their daughters and give examples of wisdom and support. Many times, the model dad is the daughter’s ‘first love,’ as she sees herself as a princess, but her dad as king.

The boys who have their dad in their home benefits, too. They learn not only skills and techniques in sports, but also learn lessons about winning and losing. They see how working as a team brings better results, and how to always be dependable and faithful. They see the model of a dad protecting the family and providing income, but being there to comfort, and overcome problems. They discover working hard to achieve goals and to build character. They also learn to respect women and to have integrity in all he does. He learns about trust and the importance of fellowship and charity. 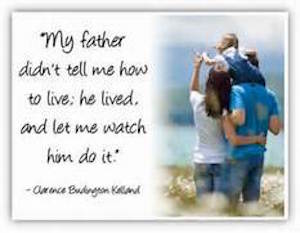 As I said earlier, in my life I was a bad influence, but later a better one. It took me a while to learn that lesson, but it still has value because it tells me that not having a father figure matters. Now, I have been blessed with six wonderful children who are now adults themselves. They are different in many ways, but also very much alike. I see my behaviors reflected in them, even down to our humor and interests. They are living good lives and are good parents to our 13 grandchildren. This is my reward and believe me, that is better than anything this sometimes silly, but always hectic world can offer.

It is from this hard-earned experience I can sit back, look at the love reflected in my family’s eyes, and celebrate ‘Father’s Day’ this week. Twice I have been given a pillow that I use daily that is embroidered with the saying, “A father is someone you look up to, regardless of how tall you get.” That’s a good thing, for even at 6’2” I am the shortest of the adult men in my family. That comment is part of my reward.

Even deprived from having that model dad in my home, I benefited from seeing other people’s dad. I’m not just talking about ‘Father Knows Best,’ types of television shows, but better yet, the real fathers of best friends, like Eddie Boggs, and from teachers that I saw in school and at church. Of course, there were likely behaviors that I didn’t see, some good, and maybe some not so good. After all, they were just men trying to do their best, but altogether human. I did see their love and dedication to their families and the respect they showed others. I’ve written of stories in this column where Eddie stepped into my life to provide guidance, discipline, and tons of encouragement. Even those few times made my life better and I’ll always be grateful to him.

A happy Father’s Day is not about the gifts or cards, or even a visit, or a phone call. It is the honor of being remembered and the affirmation that I have mattered in the lives of my family and that my children and grandchildren have benefitted from my being there. Sometimes, as men, we are not as verbal or as deeply involved in the details of family life as are those wonderful moms. It would be easy for us men to feel we are not relevant, but trust me, we are. The fruits of being there to teach, discipline, encourage, pray, and to share advice when asked, is far and away worth more than anything the world can offer us. Life is short and isn’t about one’s rank in life. It isn’t about how many toys we’ve collected, or titles, what others think about us, or how much money we have in the bank. It’s about love and that manifests itself best in the family. When we purpose to dedicate ourselves to our family and the next generations to follow, we can truly think in terms of having a “Happy Father’s Day.” I’m still trying and won’t give up.  mcoburncppo@aol.com