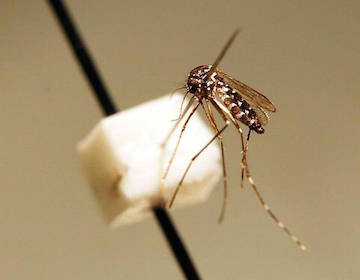 A Lexington biotechnology company aimed at fighting mosquito-borne diseases such as the Zika virus opened a mosquito factory Wednesday on Malabu Drive.

MosquitoMate, founded by University of Kentucky entomology professor Stephen Dobson, will use the 6,000-square-foot space to raise millions of sterile, non-biting mosquitoes that will act as a “biopesticide” against other mosquitoes that sometimes carry infectious diseases. The company opened a research and development center on Regency Road four years ago, Dobson said.

According to MosquitoMate, the new lab will be able to raise more than 50 million eggs and three million male mosquitoes per week. Those male Asian tiger mosquitoes, or ZAP mosquitoes, do not bite and are sterile, so when they mate with a female mosquito, her eggs will not hatch.

The company and its partners have conducted successful trials in California, New York and Lexington that dramatically decreased the population of biting mosquitoes, according to a news release.

MosquitoMate grew out of research done at UK.

Dobson said MosquitoMate has been operating under an experimental use permit for the last few years, and the Environmental Protection Agency is currently reviewing its research.

If approved by the EPA, the company plans to sell its mosquitoes to homeowners, “ the people this technology is intended to serve,” he said.

“MosquitoMate has very much to be thankful for,” Dobson said. “We have come very far in just a few years.”

Lexington Mayor Jim Gray and UK President Eli Capilouto attended the ceremony and noted the potential economic impact of the company, which plans to add 12 jobs at its new location. The company now has 10 employees.

“This story is a Kentucky story, a story of momentum,” Capilouto said. “There’s a lot more that can come out of the University of Kentucky.”