THE SEARCH FOR SOMETHING GOOD ABOUT WWII

This is a story about how a young 18 year old teenager, Betty Jo Bartram met Alvin Waltz, the love of her life and her life long companion. It was a hot August day in 1943, when a special troop train was traveling east (on the N&W Rail Road) from Indian Town Gap Pa. to Camp Picket Va. We would all go down near the RR tracks and wave at the soldiers when the troop trains passed through. I remember them being so long. They would be taking the soldiers to training camps and to the East & West coast for debarkation to the European & Pacific Theaters. It was WWII and we were fighting the Japanese and the Germans at the same time. The logistics would have been enormous moving so many troops and equipment.

On this particular day, Betty, her sister Garnet, cousins Margaret and Juanita Bartram and good friend Thelma Lynch were down by the rail road waving to the troops. This young soldier Alvin Waltz threw from the train a stick of Wrigley’s Chewing Gum with his address. Betty picked up his address and gum. Letters began to flow between them and love blossomed. She kept all his love letters and the gum. Betty jokingly told the girls, she would, “someday waltz him home.”

Alvin was from a farming community in Southern Ill. Betty was living on Sunnyside (Tug River) 2 miles south of Fort Gay, WV near the N&W Rail Road Tracks. Betty like so many sweethearts, wives, sisters and even mothers went to work in factories. They had all been retooled as defense plants to make war materials, tanks, guns, 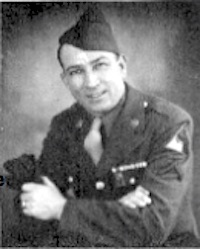 air plains etc. to fight with. Betty went to work for Dominion Electric in Mansfield, OH. She was making smoke bomb casings. The ladies were referred to by some as “Rosie the Riveters”. Many young people do not realize that there were no automobiles made in the years 1943, 44 or 45 due to the war.

Betty’s Father, Harlan Bartram was concerned about his daughter and this soldier that no one had ever seen. He ask his niece, Carnas (Bartram) Branham to write to the Post Master in Alvin’s home town (Eldorado Ill.) and inquire as to Alvin’s character. She did, and the Postmaster responded, giving Alvin and his family high marks. (Things sure have changed).

Before being shipped overseas, Alvin got a furlough and came to Mansfield to visit Betty, where they met for the first time, while she was working at Dominion Electric. Later, Betty and her Sister- in-Law Lena Mae took a trip to Ill. to visit Alvin’s parents and extended family.

Alvin was then shipped to England. One of his initial duties was being a driver for generals. He even drove for the Supreme 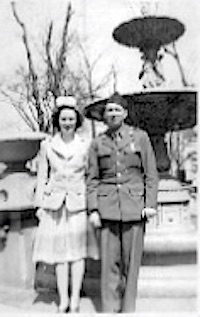 Commander, General Dwight D. Eisenhower. Alvin was in HQ. Btry. 54th Armored Battalion, Third Armored Division. Alvin was in a lot of combat and survived many battles. He made the Normandy Landing. He drove across France in a ammunition truck named “Patsy” and was in the Battle of the Bulge. During his service he suffered a ruptured appendix and had yellow fever causing him to lose his hair. He had 4 brothers that were within just a few miles of each other, but never crossed paths. They all 5 came home safely. The war ended in Europe on May 8, and in Japan on September, 2 1945. Alvin was discharged on October 3, 1945. Alvin had served 2 years prior to Pearl Harbor, from 1939 to 1941. He had been home only 1 month before being called back into service.

Betty and Alvin were married October 12, 1945 only 9 days after his discharge, by the Rev. J. C. Hager, in Louisa, KY. She had waltzed him to the    altar as she had predicted. They lived on Sunnyside and for a brief time in Ill. before moving to Louisa. He worked for Lee Hinkle, in his furniture store. They then moved to Mansfield, OH and he worked at Westinghouse before being laid off. He then worked for Mansfield Plumbing Products until his retirement in 1976.

Betty and Alvin had two Children. Sherry (Earl) “Butch” Smith and Frank (Deborah Dotson) “Debbie” Waltz. The Waltz family bought and lived on an 82 acre farm reliving similar experience they had grown up in. This was in the Lucas-Bellville, OH area. Betty enjoyed quilting, sewing and gardening. Alvin enjoyed woodworking, gardening, fishing and camping. Alvin born April 5, 1913 was 101 years old when he passed away on February 3, 2015. Alvin was from a family of 11 children. Betty born November 26, 1924 passed away 5 months later on July 7, at age 90. She was from a family of 6 children. Betty and Alvin were married for 69 years and lived in the Colonial Manor together the last 5 years of their lives.

As described above, WWII changed so many lives. Some for the better and some not so good. I recently wrote a story about Betty’s 1st cousin Jerry Bartram that was killed August 9, 1944 in Saint-Lo, France in WWII. That story, unlike Betty’s, revealed the ravages of war and the affect on so many lives.