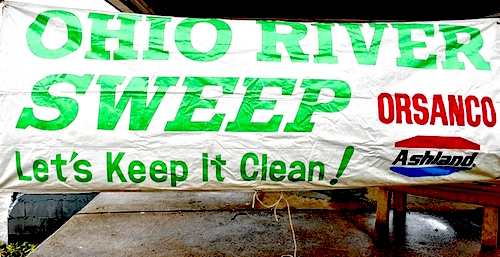 River Sweep is a riverbank cleanup of the Ohio River and its tributaries. River Sweep encompasses the entire length of the river, from its origin in Pittsburgh, PA to its end in Cairo, IL, including over 3,000 miles of shoreline and many tributaries.   Each year, more than 21,000 volunteers from public organizations, civic groups, recreational clubs, and the general public in six states bordering the river come together to collect more than 22,000 tons of trash and other debris from the banks of the Ohio River and tributaries.

Since 1989, River Sweep has been organized by the Ohio River Valley Water Sanitation Commission, an interstate water pollution agency for the Ohio River Valley, along with environmental protection and natural resource agencies from Illinois, Indiana, Ohio, Kentucky, West Virginia, and Pennsylvania.

The Ohio River is a source of drinking water for more than three million people.

More than 25 million people, almost ten (10) percent of the U.S. population, live in the Ohio River Basin. Approximately 150 species of fish have been collected from the Ohio River.

The average depth of the Ohio River is approximately 24 feet.

The widest point along the Ohio River is approximately 1 mile at the Smithland Dam.

Nonpoint source pollution from urban runoff, agricultural activities, and abandoned mines is a major cause of water pollution in the Ohio River.

Over 230 million tons of cargo is transported on the Ohio River each year. Coal and other energy products make up approximately 70 % of the commerce traveling by barge.
Fish Tissue Contaminants: Because many people eat their catch from the Ohio River, ORSANCO collects fish and examines the tissue for the presence of certain chemicals that may be harmful when eaten by humans. Yearly results are sent to the states bordering the River. If necessary, states will issue “consumption” advisories, which place limits on the type and amount of fish that can safely be eaten.

“…Last year we had a tremendous turnout, it was one of the better turnouts I’ve had in the 15 years I have been coordinator, we had around 200 volunteers and I am hoping for another big turnout at all of our site locations again this year, everyone is encouraged to attend, there is no age limit for the volunteers, however younger children will need to be accompanied by an adult.”

“…All volunteers will receive a free t-shirt for participating.”

“…The location times are the period of time that is designated so that someone will be there to assist with the River Sweep; that does not mean you will have to stay for the entire time allotted; even if you only have a few minutes to spare, please stop by the nearest location to participate.”