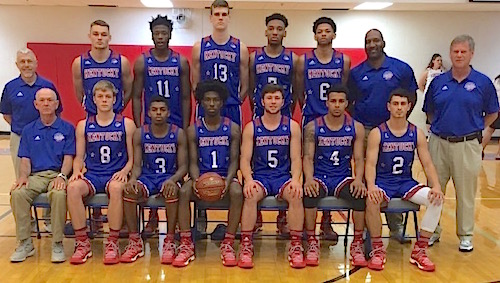 Frankfort, Ky. — For the first time in 8 years the Kentucky All Stars beat the Indiana All Stars 111-110 on Sunday afternoon and former Lawrence Co. standout Tim Dalton was a key component in the victory at the Frankfort civic center in front of almost 2,000 fans.

Dalton had four points, three rebounds and two assists and was very good defensively in the win.

The win for the Ky all stars snapped a 17 game losing streak that dated back to 2008.

On Saturday night at Bankers Life field house the home of the Indiana Pacers the Indiana all stars took game one of series 94-89. Former Bulldog star Tim Dalton had four points, two rebounds and three assists.

Kentucky All Stars including #4 Tim Dalton from Lawrence Co.

Dalton is the first player from Lawrence Co. to ever play in the Kentucky/Indiana All Star game.

“… It was a great feeling to snap the 17 game losing streak we had. We should’ve beaten them in Indiana the first game but we had some late turnovers that cost us. We were the better team I believe.”