WASHINGTON, DC — U.S. Rep. Harold “Hal” Rogers continues to advocate for federal support to revitalize coal country. During a federal budget hearing for fiscal year 2018 with Secretary Ryan Zinke from the U.S. Department of Interior, Rogers questioned why the agency proposed to eliminate important programs that would support ongoing efforts for economic growth in Central Appalachia. 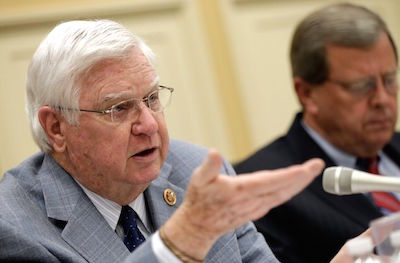 Specifically, Secretary Zinke’s budget would eliminate the Abandoned Mine Land (AML) Pilot Project that has provided a total of $195 million in fiscal years 2016 and 2017 for projects that reclaim abandoned mine lands and create jobs in states hardest hit by the downturn of the coal industry over the last eight years, including Kentucky.

“I come from coal country, or what used to be coal country. Now these towns have more plywood windows than paned glass,” said Rogers, who serves as Chairman Emeritus of the House Appropriations Committee. “I’ve lost 12,000 coal mining jobs just in my district in the last few years, a good part of which was caused by the United States federal government under the last administration. The war on coal is real and unfortunately has had a devastating impact.”

“The AML Pilot Program is a win-win. It’s good for the environment and it’s good for jobs. It has bipartisan support here in the Congress and we’re seeing good results of projects that have been undertaken and delivered with this two-year pilot program. It’s working and it’s helping desperate areas of the country,” continued Rogers. “It’s limited to a few states where the impact has been the most severe. That’s why I was completely flabergasted in seeing in your budget request, the elimination of that program. This coming from an administration that I was led to believe wanted to help coal country. In eliminating this kind of program, it sends a glaring message to these desperate people who had a big impact in the recent election.”

Rogers also asked Secretary Zinke to “shake loose” a 2016 study of the pilot program that he requested from the Offce of Surface Mining and Reclamation Enforcement. Secretary Zinke committed to follow up on the report.

In addition, Rogers urged Secretary Zinke’s support and collaboration on the bipartisan RECLAIM Act of 2017 that has been introduced in both the U.S. House and Senate. The RECLAIM Act of 2017 fast-tracks the release of $1 billion of available, unspent dollars in the federal Abandoned Mine Land (AML) Fund for the purpose of reclaming abandoned mine lands and economic development in coal country.

“The money must be used on abandoned mine lands, but with a bent toward economic development potential for creating jobs at the same time,” said Rogers. “It’s a multi-state bill. It has agreement in the west and east of the U.S., and from both parties and both houses of the Congress. And I would hope, Mr. Secretary, you would see your way clear to be supportive of that type of bill.”

Secretary Zinke responded, “There are about 1,800 mines on the list for reclamation, but to turn those lands over to something productive is something I think is beneficial to us all.”

For more information about the RECLAIM Act of 2017, visit halrogers.house.gov.