Kentucky chef vies to be next ‘Food Network Star’ 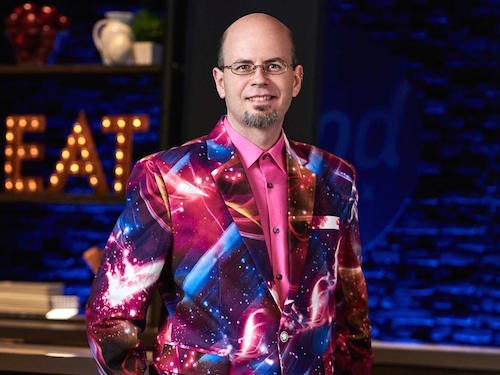 Proving that life is meant for more than grilled cheese and Salisbury steak, an elementary school cafeteria manager from Grayson, Kentucky heads back to the Food Network after winning the network’s “2016 Holiday Baking Championship.”

“The kids [at Isonville Elementary] were tickled pink that I won the ‘Holiday Baking Championship,’” said Jason Smith. In fact, the entire town treats him like a celebrity.

“They say [country singer] Keith Whitley and I are the biggest things to come out of this town.”

The 39-year-old baking sensation is an all-around accomplished cook who runs a catering business on nights and weekends. Starting at age 6, Smith’s grandmother had him helping in the kitchen at the family’s Laurel County Farm. “If something didn’t taste right, she’d tell me to throw it out back for the chickens,” remembers Smith.

Judging from Smith’s win on “Holiday Baking Championship,” his kitchen skills are superb — as is his on-camera presence.

“A lot of people are scared to death of the television cameras,” said Smith. “There were times when 10 or 15 cameras were all around me and I kept telling myself they were friends or family. I got over being nervous very quickly.”

With his thick Eastern Kentucky accent, a self-described flamboyant wardrobe — Smith loves “loud, colorful jackets” — and a sincere drive to win, the cafeteria manager is a perfect contestant for The Food Network.

The next competition for this Kentucky cook kicks off Sunday, June 4 at 9 p.m. Culinary icons Bobby Flay and Giada De Laurentiis serve as mentors and judges on “Food Network Star.” (Louisville native and chef, Damaris Phillips, is a previous winner of “Food Network Star.”) As one of 13 competitors, Smith will showcase his cooking and on-camera skills, hoping to prove to the celebrity judges he has what it takes to join the Food Network family.

“I love every minute of being on camera and would love my own show,” Smith said. For more “Food Network Star,” fans can visit FoodNetwork. com/Star all season for exclusive interviews, video, blogs, quizzes, behind-the-scenes photo galleries and more.

Fans can also connect with each other and the show’s stars on Facebook at Facebook.com/ FoodNetwork and on Twitter with the hashtag #FoodNetworkStar.