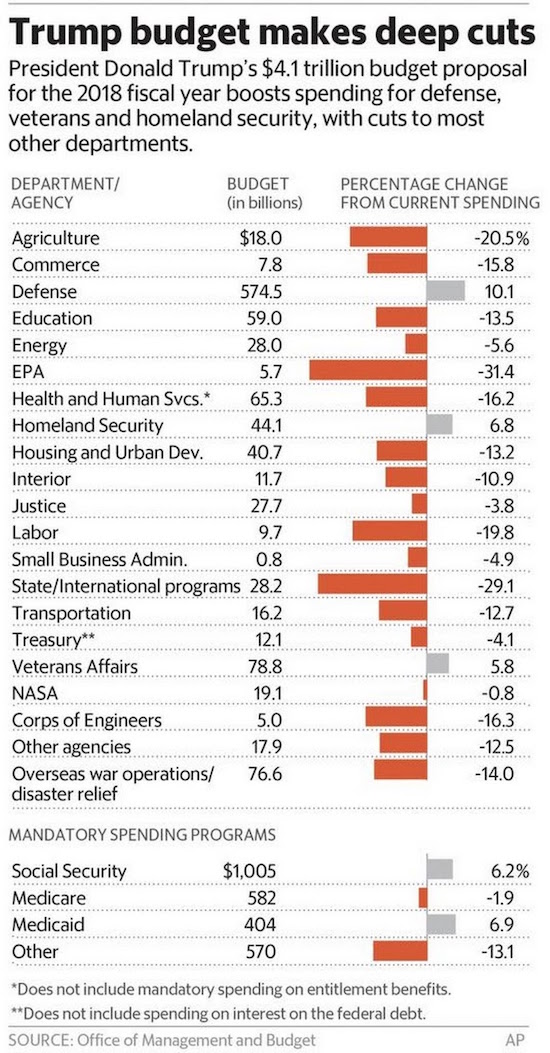 The Trump administration’s proposed budget was slammed by leaders from states with large rural populations, who called agriculture cuts “a slap in the face” to rural voters who put Trump in the White House, reports Linsday Wise for McClatchy Newspapers and Brian Lowry for The Kansas City Star.

Two of farmers’ most powerful Republican advocates, Sens. Pat Roberts and Jerry Moran, both of Kansas, where Trump won by 20 percentage points, say the budget’s plan to slash crop insurance and other programs critical to rural areas “would badly wound one of the president’s most loyal constituencies,” Wise and Lowry report. The budget cuts crop insurance by $28.5 billion—36 percent—over 10 years. That’s significantly more than former President Barack Obama ever proposed. Like Hillary Clinton in 2016, Obama was beaten badly in Kansas in 2008 and 2012.

Roberts, who called the cuts “not viable” and “very troubling” for Kansas, told reporters, “We’ve had a freeze, and we’ve had a historic prairie fire, and then we had another freeze and we’ve lost about 40 percent of the wheat crop. How on earth of those farmers supposed to stay in business without crop insurance?”

The Kansas senators, as well as others from predominantly rural states—where Trump won by a 61-34 count—”were taken aback by the degree of devastation to crop insurance in Trump’s budget, especially when farmers already are struggling with low crop prices,” Wise and Lowry writes. “Farm bureaus and commodity groups blasted the move as ‘unwarranted,’ ‘unwise’ and ‘devastating’ to the farming economy.”

Donn Teske, president of the Kansas Farmers Union and vice president of the National Farmers Union, “said the proposed cuts felt like a betrayal to farmers,” telling reporters, “We’re in the middle of a farm crisis with no end in sight and they look at what the president’s proposing and they don’t see any help. They see a slap in the face.”

Wise and Lowry write, “Chances are the cuts won’t ever become law. Republicans, who control 52 of the Senate’s 100 seats, are expected to write their own budget plan. With Roberts and Moran instrumental in writing that legislation, it’s doubtful Trump will get his way.”