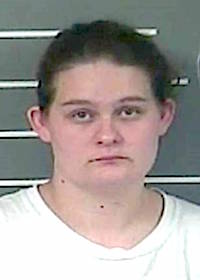 The Girl Scout leader from Floyd County indicted in connection to a theft of more than $15,000 worth of Girl Scout cookies was arrested this past week and, officials say, 63 cases of the cookies have been recovered.

The troop from which the cookies were stolen has declined to take back the cookies and, according to Pike Commonwealth’s Attorney Rick Bartley, the cookies potentially may be donated to Kentucky State Police for use during its Trooper Island summer camp.

“We contacted the Wilderness Road troop of the Girl Scouts and they told (Trooper John Gabbard) they did not want the cookies back,” said Bartley. “They could not resell them, they said, because they could not guarantees the integrity since the cookies had been out of their custody.”

According to Bartley, Leah Ann Vick, 26, of North River Road, Auxier, who was a troop leader for the Wilderness Road Chapter of the Girl Scouts, was arrested on May 16 in Fleming County and has since been transported to the Pike County Detention Center.

Following her arrest, Gabbard conducted interviews with Vick, who told the trooper that there were 63 cases of the stolen cookies at a residence in Knott County. Gabbard recovered the cases, still packaged and sealed, at the location.

Bartley said Vick is scheduled to be arraigned on her charges this Friday in Pike Circuit Court. On Friday, Bartley said he plans to discuss with Vick and her attorney potential possibilities for the cookies.

“We are going to ask her and her attorney to forfeit the cookies to KSP to forward them on to Trooper Island where they can be used during the summer for the kids,” said Bartley. “The cookies would not be sold. They would take the cookies there to feed the children. That is one of the things we are talking about and we will take that up Friday.”

Also, Bartley said that he will take the opportunity Friday, and in the coming months, to determine the particulars of the amounts of money and cookies that had been taken.

“The court will set a pre-trial hearing in about three months,” said Bartley. “That will give me and her attorney a chance to discuss in more detail about how much money are we talking about, how many cookies are we talking about and what are the ramifications of what she has done.”

Bartley said that time period will also allow a chance to answer the question of just why Vick stole the cookies.

“One thing I do know is Leah Vick does not have a significant criminal history. So, we will try and see what her problems are and why she did this,” said Bartley. “Once we have had the opportunity to go through all of this, we will be in a better position to recommend as far as any kind of treatment or punishment, or are we going to end having to go to trial in the case.”

CONGRATULATIONS TO GARY LYONS FOR 35 YEARS WITH TRMC