NEIL TURNER WINS 2017 CADILLAC XT5 WITH HOLE IN ONE

NEIL TURNER WINS 2017 CADILLAC XT5 BY HITTING HOLE IN ONE 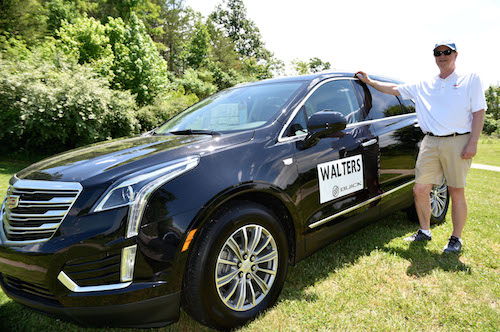 The highlight of the event happened early when Neil Turner, with Tuner Technology, Inc., hit a hole in one on the Par 3, hole 8 to win a 2017 Cadillac XT5 from the Walters Auto Group.

“I couldn’t believe it,” said Turner. “You dream of hitting a hole in one, but to hit one like this is amazing.”

Seventeen teams played in the golf scramble, which is played annually in memory of William G. Duke. Duke served as the special projects coordinator at the college from 2004 until his death in 2012.

Winner of the longest drive was Chase Carpenter of ICC Global Hosting.

“This was a great day of golf for an even better cause,” said Dr. Alan Scheibmeir, interim president of Big Sandy Community and Technical College. “We want to thank all of those who made this event a success.”

For more information on the Big Sandy College Educational Foundation, Inc. or giving opportunities at BSCTC, contact Kelli Ayers at (606) 886-7358 or email kayers0006@kctcs.edu.

DOG REUNITED WITH OWNER AFTER TWO-YEAR ABSENCE AND 2,200-MILE JOURNEY