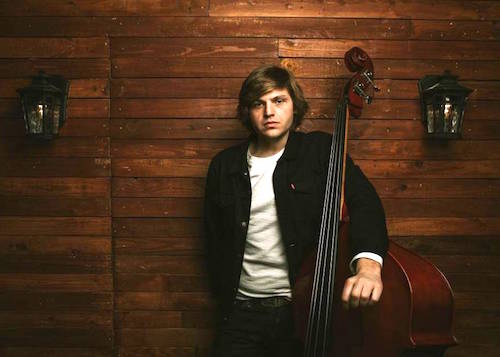 First, let’s first outline the trajectory. When viewing the music of Adam Chaffins, you pretty much have to.

Born in Louisa and fascinated by 1990s country radio, the young bassist moved to Louisville to study, curiously enough, opera at Bellarmine University. After a year, he was drawn southward to refocus on jazz at Morehead State University, and to explore what its Kentucky Center for Traditional Music had to offer — namely bluegrass and numerous variants. Graduate studies in Nashville didn’t prove to his liking, so he hit the road with bands as varied as the longstanding British pop brigade World Party and new-generation bluegrass troupes as the Deadly Gentlemen and Town Mountain.

So is it any wonder the songs Chaffins is now fashioning on his own sounds a whole lot like … all of that?

“I would say it’s a departure from bluegrass, most certainly from traditional bluegrass,” said Chaffins, who will debut his new music with an even newer band Friday when he shares a bill with Airpark at Willie’s Locally Known, a Lexington restaurant. “It’s not a bluegrass thing at all. The word bluegrass doesn’t define it. It’s definitely more in the Americana genre, but it’s influenced by other things. I would say it’s experimental but is definitely more current music-friendly. The instrumentation has drums, electric guitar and things like that. I think fans of (Chris) Stapleton, Lake Street Dive and The Wood Brothers would appreciate it.”

Chaffins’ journey began in Eastern Kentucky, encouraged by family and friends, but with a fascination with songs he heard on the airwaves.

“I was definitely into country radio growing up,” he said. “I still am. I learned to play music in church, like most people do in that region. I had great mentors growing up, great teachers who really helped me in a lot of ways, who gave me direction and saw my interest in music. They did a lot for me to boost confidence and answer questions to things I didn’t know the answer to yet.”

The move to Bellarmine to study with, among others, jazz pianist Todd Hildreth, was an eye-opener not just in terms of studying music but in experiencing it in a more metropolitan environment.

“I went from Lawrence County High School to Bellarmine, so it was a drastic jump. Louisville, at that time, wasn’t really as big as it is now or had as much going on as it does now. But for an 18-year-old kid who grew up in the country, jumping into those waters was definitely a shock to the system. I had no idea, really, how to relate to the people there — especially musically. I had some friends in the dorms and stuff. But it was a drastic jump for me for sure.”

The move to Morehead was an adjustment, too, but one Chaffins termed as welcome.

“I was instantly surrounded by people who were really good — and a lot of them. It was a competitive environment but it was also a fostering environment. I had a very unique experience there. Jesse Wells at the Kentucky Center for Traditional Music, who plays with the Wooks, was definitely a huge influence in so many different ways. He’s the guy who introduced me to John Hartford, who opened my mind up and got me on the path to where I am now.”

The Morehead education — and eventual touring with the traditionally aggressive Town Mountain, which brought the bassist to Lexington for several high profile performances, including an outdoor concert as part of the 2015 Breeders’ Cup Festival — might suggest that the solo music Chaffins has been working on would lean heavily to bluegrass. But a listen to five unreleased tunes presented for review reveals a loose, electric setting, with Chaffins’ effortlessly soul-saturated vocals promoted as much, if not more, than his bass work. It would be a better blindfolded guess to say the songs were the products of a young Muscle Shoals artist than a Lawrence County native.

“I wanted to come home to debut it,” Chaffins said. “I’ve been playing with some great musicians from Nashville who have toured with a huge list of people. I’m just so fortunate that they want to play with me also. I’m just excited to get out and play some shows live with the band. I’ve been in the studio rehearsing for so long. I can’t think of a better place than Willie’s to get everything going.”

Willie’s Location – It’s in Lexington, Ky on Southland Drive off Nicholasville Rd.   Mile or so down on left. It’s a BBQ place a guy that was in partnership with Cheddars is trying to spin this into a chain as well.  Thank you so very much! You are the best!