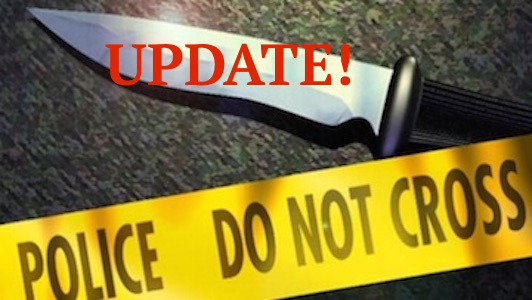 The condition of stabbing victim Melissa Dixon is improving after she was stabbed near the heart with a “butcher sized knife” last weekend in an incident on Pearl Street in the Gene Wilson Blvd, area.

Dixon remains in the ICU unit a Cabell-Huntington Med Center where she is listed as stable.

“Last we heard this morning (Wednesday) she was in ICU but expected to make full recovery. The knife did penetrate her sternum but only soft tissue damage,” Louisa Police Chief Greg Fugitt said.

On May 14, 2017 at 12:32 am the Louisa Police Department responded to the call of an intoxicated woman, Stacey Keesee, not wanting to leave and arguing with Ex-Boyfriend Marco Cortes about his live-in girlfriend/victim Melissa Dixon, 35, being at the residence located on Pearl Street in Louisa.

According to officers arrest report, before they arrived Mrs. Keesee lunged toward Mrs. Dixon while Mr. Cortes attempted to hold her back. Officers noticed a stab wound in the center of the victims chest. Cortes was able to restrain Keesee until officers arrived and took her into custody.

Dixon was treated by Net Care Ambulance and flown by helicopter to Cabell Huntington Hospital in Huntington WV.

Keesee was arrested and charged with Assault 1st and Criminal Trespass 1st, upon completion of investigation the case as presented to the Lawrence County Grand Jury.” Ms. Keesee was indicted by the Grand Juey on the charges. There is no information available about whether she has been released on bail.