Kory Caudill to celebrate new album with concert in Prestonsburg 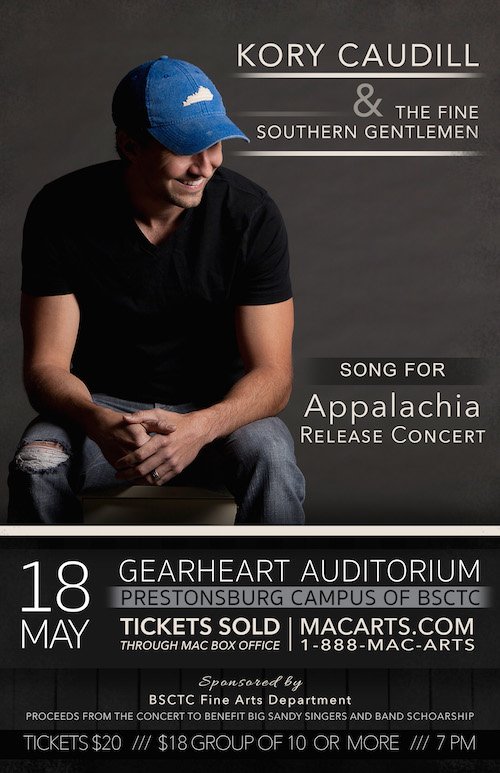 Prestonsburg, Ky. – Floyd County native and Nashville recording artist Kory Caudill returns home this Thursday, May 18, to perform at the Gearheart Auditorium on the campus of Big Sandy Community & Technical College. He will be accompanied by his versatile band, The Fine Southern Gentleman. Caudill will be celebrating the release of his new album, ‘Song For Appalachia.’

Caudill says the concert will be full of eastern Kentucky musicians including former Kentucky Opry stars James Whited, Roger Coleman, and Caudill’s father Keith Caudill. Also singing and playing Thursday will be rising country star and eastern Kentucky native Josh Martin. Caudill and his band will be debuting a new music video on stage too. He recently spent time with a film crew shooting scenes for the video in various parts of eastern Kentucky.

Caudill says he is so proud of this album.

“It means so much to me,” he beams. “There has been an eastern Kentuckian in every part of the production of this project. Even down to the album cover. The black color is from parts of coal from different coal mines.”

Caudill and his band will be playing all of the songs from the new album Thursday, along with old classics and possibly some covers. They have such a diverse lineup of musicians, the set list will consist of jazz, rock, Americana, and blues. All with an eastern Kentucky flavor.

Kory Caudill and The Fine Southern Gentleman will be Thursday, May 18 at 7:00 p.m. at the Gearheart Auditorium on the campus of Big Sandy Community & Technical College in Prestonsburg, Ky. Proceeds from the concert benefit The Big Sandy Singers & Band Scholarship fund. Tickets are $20, or $18 for a group of 10 or more. They can be purchased online at www.macarts.com or by phone at 1 (888) MAC ARTS.

The Mountain Arts Center is the premier performing arts venue in eastern Kentucky.  Located in the heart of the bloodline of the Country Music Highway, the facility features a 1,050-seat auditorium, conference/meeting facilities, instruction rooms and a state-of-the-art recording studio. Operations are through a partnership between Prestonsburg, Ky. and Big Sandy Community & Technical College.  For more information, call 1-888-MAC-ARTS or visit macarts.com.

MARK YOUR CALENDARS: LUMC TO HAVE GOLF SCRAMBLE JUNE 17