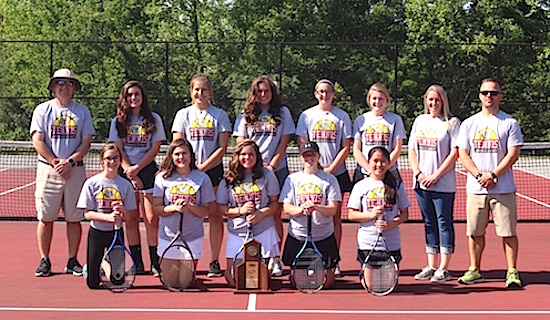 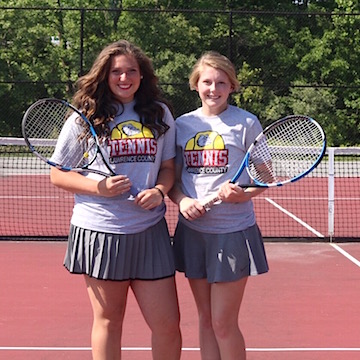 The girls never lost a set on their way to the title with wins over Rachel Blackburn and Kassidy Caudill of Pikeville 7-5 and 7-5. In the semifinals they took care of #3 Seed Ashton Jones and Kennedy Trusty 7-5 and 6-3.

In the finals the ladies beat #4 Seed Jaden Hackworth and Jenna Hackworth 6-1 and 6-4. With the win Webb and Pollack qualified for the State Tournament.

Also in Doubles it was the Lawrence Co. duo of Sophomore Katelyn Pauley and 8th Grader Brook Fletcher going 1-1 with a win over Lyndsey Horn and Carley Fraley of Sheldon Clark 6-1 and 6-1 before falling to #1 seed McKenzie Mayse and Emily Hammonds of Morgan Co. 2-6 and 3-6.

In the singles portion it was #3 Seed from Lawrence Co. 7th Grader Adrian Webb going 2-1 before losing in the semifinals but Webb qualified for the State Tournament. Webb beat Marcy Blair of Johnson Central 6-0 and 6-0, Madhu Ammisetty of Pikeville 6-1 and 6-1 before eventual champion #2 Seed Emma Harris of Belfry beat Webb 1-6 and 0-6. 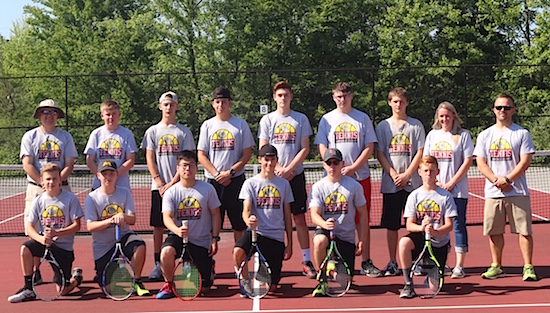 In the Boys portion of the 15th Region Tournament it was the duo of Lawrence Co. Seniors #2 Seed in the doubles Nick Kessinger and Alan Lin who went 1-1 after receiving a first round bye.

The duo beat McKenzie Daniel and Jacob Elam of Morgan Co. 6-3 and 6-2, before falling in the semis to #4 Seed Cameron Alley and McKinley Webb of Pikeville 5-7 and 4-6. Kessinger and Lin qualified for the State Tournament.

8th Grader Brock Kessinger and Sophomore Noah Fairchild went 1-1 with a win over Seth Ousley and Brandon Richmond of Paintsville 6-0 and 6-0, before falling to #3 Seed Sean Gevedon and Hunter Kemplin of Morgan Co. 0-6 and 5-7. 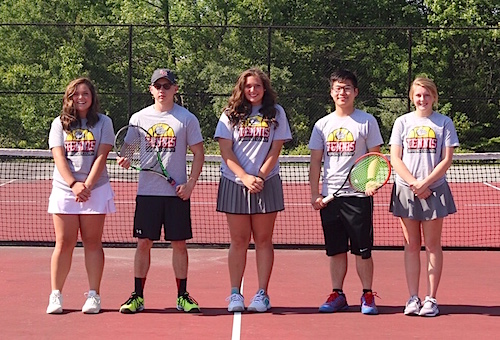 Lawrence Co. will have five competing in the 2017 KHSAA State Championship this Thursday, Friday and Saturday in Lexington.

In the Girls Doubles Maci Pollack and Eden Webb will play Thursday morning at 9:15 vs Jessica Hill and Caroline Lancaster of Lexington Christian.

In the Girls Singles Adrian Webb will play Lauren Waddles of Lexington Christian at 8:00 Thursday morning.

In the Boys Doubles Nick Kessinger and Alan Lin will play Thursday morning at 10:30 vs Warren Forsythe and Dalton Hembree of Caldwell Co.

“… We have an exceptional group of boys and girls on the tennis team. They not only excel on the tennis court, but most importantly, in the classroom. I am very proud of both teams.”

“…Our girls’ team had a great year, with only one loss during the season to Russell. During the regional tournament, all of the girls won a first round match, which was crucial in winning the team title. We were tied with Morgan County going into the doubles final. Eden and Maci pulled out a big win to secure their first Regional Doubles Championship and also clinch the Regional Team Title.”