Summer Feeding program begins June 5, 2017; School teachers (certified/classified) get raise in the amount of 1/2 of 1%…LOL

The Lawrence Co. Board of Education met for their regularly scheduled meeting at the Lawrence Co High School, Louisa, Ky on Monday, May 15, 2017. Those in attendance were Dr. Robbie Fletcher, Heath Preston Chairman, Garnet Skaggs Member, Jim See Member and Barbara Robinson Member. Absent was Maddlene Roberts. The meeting was then called to order.

Motion made by Jim See, second by Garnet Skaggs to approve the amendments to the agenda. All in favor.

The following volunteers were then recognized for the dedication and hard work they do to benefit the school children of Lawrence Co.

The awards for Outstanding School and District Volunteers went to Molly Meek of LMS, Atasha Hughes of LWES, Elizabeth Owens of LEES, Grace Fitch of LCHS, Brittany Bowen of FES and Jennifer Boggs of BES. Superintendant Fletcher commended all of the volunteers at every school, ” Thank you for being ALL in with our kids” Fletcher stated. Blaine Elementary School will keep the District Banner for compiling the greatest number of volunteer hours.

The presentation for Jill York for the Patton Education Advocacy Award was postponed until the June meeting.

The Superintendent began his update with a sincere thank you to the community and all those that participated in the Scholarships/Awards Night for LCHS seniors.

“There were thousands of dollars handed out in scholarships and awards for our students. Our businesses sure came through for our kids. All the year end activities and advancement ceremonies at our schools were very nice,” Fletcher said

Information Officer Tommy Burns then updated the audience on the 1-1 initiative for grades 9-12. A committee has been formed district wide to determine policies and procedures the upcoming project.

Vernon Hall, Human Resources, then gave a brief overview of the changes made to hiring procedures that will be implemented next year. Hall said prospective employees will be able to apply and upload any pertinent documents on-line that are needed for hiring. Principals will be able to see applicants for each position.

Once again the Free Summer Food and Fun Program will be available this summer from June 5th – July 28th serving all kids ages 1-18 with breakfast and a hot lunch. The daily program will consist of 9-9:30 Breakfast, 9:30 to 11:30 Activities and 11:30 to Noon Hot lunch. Blaine Elementary School will host on Mondays and Tuesdays, Lawrence Co. High School on Mondays and Wednesdays, and Fallsburg Elementary School on Tuesdays and Thursdays. 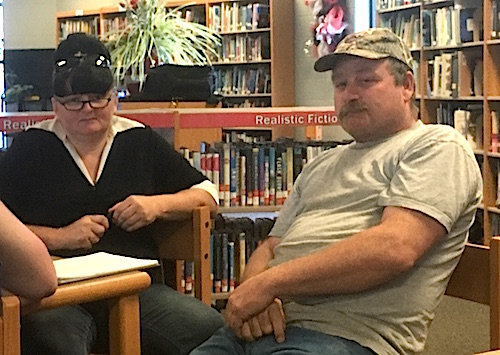 Rhonda and Danny Ramey were at the meeting to again voice their position against the proposed nickel tax for construction of a new school.

“Don’t get me wrong, we are not against a new school located in the center of the county. It’s not the money — its the location. Mrs. Ramey added that she would like the Board to consider giving the children Veteran’s Day off next year.

Motion by Barbara Robinson, second by Jim See to approve the monthly Financial Report submitted by Brandi Vanhoose, Finance Officer. A meeting was set for May 30, 2017 at 6pm to discuss finance updates. A special ‘End of the Year’ meeting was scheduled for June 22, 2017.

The following agenda items were then addressed. Motion made by Garnet Skaggs, second by Jim See to approve the following requests.

* Per Diem and expenses for members present

There were also several requests granted.

Request for assistance from the LMS Girls Basketball Team for new uniforms, Dr. Fletcher stated ” It has been 7 yrs since they have had new ones” $3,440.63

Request for assistance with rooms for the FFA State Competition in Lexington,Ky.

The next item on the agenda was to discuss and approve the Board’s intent on its reaction to the Nickel Recall Petition. Dr. Fletcher informed the Board of four options available for handling the matter after a successful petition drive means the ‘nickel tax’ will go on the ballot.

*  The Board could drop the request for the tax.

*  The Board could hold a Special Election, which would cost the Board $30,000 to get it on the next ballot. (Actually it means the BOE can set the date 30 days after the petition is certified or any time in between)

*  The Board could ask the County Clerk to place it on the November, 2018 ballot and not pay anything.

*  The Board could challenge the findings of the County Clerk’s Office regarding the petition.

Three time board member Barbara Robinson and Jim See were quickly opposed to the Board spending $30,000 at this time for an election, citing several projects that the money could better be used for.

Chairman Heath Preston proposed that the Board place the item on the November 2018 General Election ballot so citizens would have an opportunity to vote on the tax.

Motion made by Garnet Skaggs, second by Barbara Robinson with all members approving to utilize Option 3 (voting next November 2018).

The Board then reconsidered the selection of a vendor for the 1:1 technology update for grades 9-12. Lenovo came in with the best offer which also included shipping. Motion by Jim See, second by Barbara Robinson to approve the 2017-2018 Law. Co. Schools District Technology Plan to purchase these computers.

Motion by Garnet Skaggs, second by Jim See to approve amendments to the 2016-2017 School calendar

Motion by Garnet Skaggs, second by Jim See to approve Philip Hunt with Hall and Clark Insurance Agency as the Agent of Record for insurances

Motion by Barbara Robinson, second by Jim See to enter Executive Session for a discussion of legal issues (proposed and pending litigation) pursuant to KRS61.810(1)(c).

Motion by Jim See, second by Barbara Robinson to approve creation, abolishment, and/or changes regarding positions. 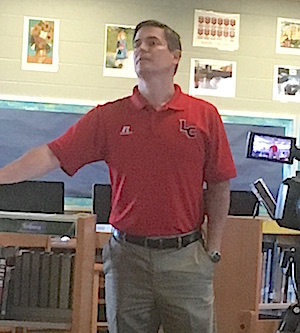 Heath Preston proposed to the Board to give an across the board raise to all teachers (certified/classified) in the amount of 1/2 of 1% . Motion made by Jim See, second by Barbara Robinson with all in agreement to raise the wages across the board by 1/2 of 1%.

A time and date was set for the Superintendent’s Evaluation to June 22, 2017.

Re: Request to the Lawrence County Board of Education for Creation regarding Positions and Extra Duty Service Pay

Request the following position be created effective May 15, 2017: