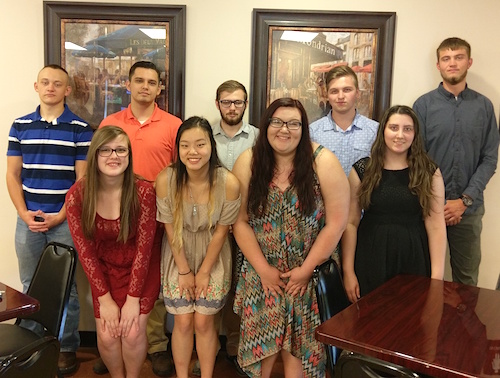 The Lawrence County Rotary Club held its weekly meeting on Thursday, May 11th. The meeting began with the traditional prayer, Pledge of Allegiance and Four Way Test.

After that announcements were made about different events going on in the community. Dr. Rob Fletcher announced the time of graduation, and for people unable to attend in person can watch it live through Lycom. The Blaze 5K will take place on Saturday and over 300 people have signed up to attend. Volunteers are needed in order for the event to be as successful as possible.

This week was unlike most meetings, Rotarians hosted the LCHS Senior-Junior Rotarians. Each of the Lawrence County Seniors stood and introduced themselves and told of their post graduation plans for college, technical college, and other plans.

Rotary President Lindsey Case, AKA “Miss Case” put together a picture video of her students, and a speech on what an amazing bunch of young adults each of them were.

“I have laughed with them, cried with them, watched them go through break ups and high school drama, we together have suffered the loss of classmates, and they truly helped me get through the loss of my grandfather,” Case said. She spoke of how many different causes they had raised money for through their dollar club. They didn’t just donate money, but they donated much of their personal time to help others.

After hearing all of the things these young adults have done, there is no doubt they will do great things after high school.